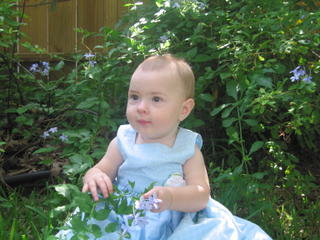 She's an amazing and beautiful baby girl. She has more facial expressions than any baby I know. She uses her eyebrows and lips grandly, eloquently and with verve. Laid back doesn't apply. Happy as a lark and giggling with gusto turns on a dime to furious and blowing raspberries to signal her strong disapproval.

Her sister gets away with little; this is no shy, follower of a second child. She's strong, a strong presence who won't be forgotten or ignored. She not only tries to keep up with but also tries to outdo her sister regularly. In the car, on Sunday, she sang a chorus to her sister's song. As her sister---frustrated to share the limelight---got louder and louder, so did she.

Smart as a whip, stubborn as a mule, precocious, curious, mobile, sensitive, going in two directions at once, clinging to me and yet moving away as fast as she can...she's not yet a year but she's a lifetime away from a mere eight months ago. 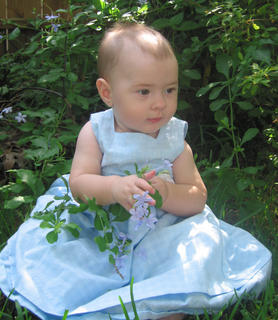 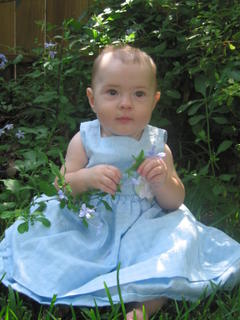 jouettelove said…
how beautiful she is! that is such a wonderful age, and good for you for documenting her sweetness like this. ahhh, baby fever is hitting big time!
August 16, 2005 at 12:08 PM

louismartinez5079 said…
I read your blog, and i thought it was rather cool. check out My Blog
Please Click Here to view it