What Bank of America Can't Tell You 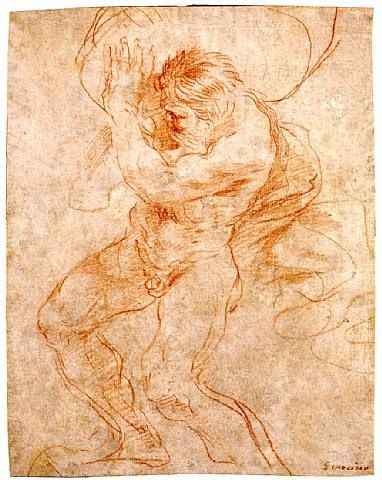 Does Sisyphus eventually collapse under the weight of the stone? Lately---as I try to fix everything that has been broken from the move and other life events---I wonder.

Today's was Bank of America.

I'm not sure whether I mean Bank of America as the stone or the moutain.

But it's definitely an obstacle, either way.

Possibly it's better to go Latin than Greek in my analogy here.

Perhaps Bank of America, like late Rome, is collapsing under the weight of its own empire and bureaucracy.

Because they certainly seem either very confused, utterly untrained, or totally out of control in the Electronics Claims Services division. You know? Those aren't mutually exclusive. It could be all three.

I cite the "shifting date game" and the "semantic challenge" I've been playing with them lately.

Let's go back to April. Back then, my husband and I hired---after due diligence, mind you---a web designer to design our business web site. We paid him a down payment to begin work. We had a very specific task list, deadlines, and so forth. We got suspicious when this guy---known as Spoonfuck to the point I can't recall his true name without looking at his driver's license and/or the contract---pretty much did nothing other than try to gloss over his nothing with lots of glib words and excuses.

So I checked. I had 60 days, Bank of America Electronic Claim Services Specialists told me. I have their names, but will protect the idendity of the guilty.

You'll be surprised to hear our efforts were a failure, won't you. ;)

So we filed an affidavit with Bank of America (BOA) to retrieve our money. By force. We and some other valiant BOA local employees worked hard to ensure that we filed the claim by the deadline BOA told me.

When we followed up a few days later...

Well let's just say it's like that movie...our call automatically entered us in the Shifting Dates Game and Semantics Challenge.

Next...came today. The Semantics Challenge. I called an spoke to Lauren, a most uncompromising lady. She concurred that the charge was 17th, as I said, but stated they got the affidavit the day after I sent it (so which matters...when it is sent...or when they receive and know they received it?) and anyway, it was past the 57 day period.

Ignoring the fact that 57 days sounds like a very freaky odd number and not one you normally run into in business...this was the absolute first time in a month of talking to BOA Electronic Claims Specialists I had ever heard it.

Person after person said...60 days. Not a single one deviated. I had letters. Documented phone calls with names, times and notes.

And this lady, Lauren, was so doggedly sure of herself that she asserted her co-workers, her camarades in arms, as well as me...were all wrong, and more than a little nuts. No such thing as 60, she assured me.

I had one response: NACHA.

Basically? She pulled that out of her ass. I know, you are shocked.

When I found myself in a near yell repeating, "No more official language! No more excuses! FIX IT...FIX IT...FIX IT..." I forced myself to calm down and in a more reasonable tone asked to speak to her boss.

See here's the thing: they have sixty days to work within, not sixty days to hear from you *by.* Sixty closes the door, window and shutters even. Period. The employees clearly don't get this, and as a result, neither did I. I thought it was a "file by" date, not a "window of opportunity that closes on Day 60" date. They "request" that we file at least a few days ahead of the 60th day so they have time to review and file the claim by the 60th day.

In the end, it makes sense, but it absolutely was NOT what we were told. And "requesting" isn't "requiring."

He won the ultimate war---basically I am SOL here---but I won the Semantics Ultimate Challenge Battle.

Like a dog with a bone, I seized on every little subtlety, nuance, mistake, change in language. 57, 55, request and prefer versus require and stipulate in a policy. BOA had a big responsibility here, and they blew it too.

However, he knew, and I knew. You can't fight NACHA...

Sensing he had won and I was backing down, weakening, he reached into his training from hostage negotiators, adding in some flattery and "I'm on your side" tactics.

It worked for a second---because who doesn't want to be recognized for the talented, intelligent, interesting person we each know we are?---but then he overplayed his hand and mentioned how my bank accounts show I am successful.

I said, write a memo and distribute it to your employees so they don't arbitrarily make up numbers on the fly, make sure they understand a clear and concise policy. And have one for products (which is a black and white matter) and one for services (more gray). They have some wiggle room here.

I also said, write this in an article as a service for bank customers. Post it to your web site.

I said I'll be checking back in to make sure that it is done. And I will.

Maybe I am screwed but maybe I can prevent some other poor schmoe from the same fate.

I might be a fool who was soon parted with her money, but there are clowns to the left and jokers to the right of me.

Note: Art by Guercino, approximately 1650s, red chalk. For more information about the artist and this piece, please visit, this drawing's site at artnet.

Yes, that semantics game would have driven me ape-crap.