A series of unfortunate events (with a fortunate twist) 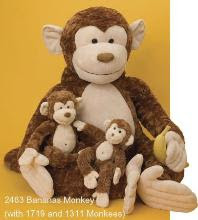 The monkey, her wrenches, and the works. (Available here.)
Today...monkeys are throwing wrenches into my works. It's 8:30 in the morning and already shaping up to be one of those days. You know, one of those days---like every other one, only for some reason today you want to bang your head on the wall because that seems to offer relief of some sort.

* When I walked into the downstairs half bath, I could immediately tell the Smurfs had broken in to our house because they left little blue handprints all over the wall, sink, mirror, doorknob and door. I'm not sure what they were after in the half bath, but apparently it had something to do with the hand soap, which was mostly gone.

* The kitchen fairies must have been scared away by the Smurfs because when I finally made it to the kitchen, the dishwasher was still full of dishes (clean at least), and the sink was still full of dishes (dirty, sadly). Also, nobody cleaned the Whatever off the bottom of the refrigerator or the crumbs out of the toaster oven. I'd fire them except they didn't register any contact information other than "1 Imagination Street" on their job application form.

* Our personal chef didn't show up for work today so I also scrambled like a short order cook to feed the children, who were chirping like starving baby birds. At 7:30 on the dot, I sent the 6.5 year old upstairs to get ready for school. I called out her usual string of tasks, "pottywashhandwashfacebrushteethbrushhairclotheson...then downstairs and SHOES!" But in case the sound of my voice is like a dog whistle---which it often is to everyone in my family---I have it on a chart, too, with illustrations and words. Sadly, my daughter seems to suffer from the same chromosomal abnormality her father has, which manifests as the following:

I happened to not realize this in the chaos of 45 things going insane at the time we were trying to walk out the door so I did not see the jam smears on her face and her flyaway hair until we got to the school, you know, 15 seconds before the tardy bell.

I told her to check in with her teacher then excuse herself to go to the bathroom and clean herself up as she was meant to do at home before leaving the house. She swore she did brush her teeth but you'll pardon me if I shoulder a reasonable amount of disbelief.

When does "desire to be hygienic" kick in? Is it a case of you either have it or you don't?

She walked into school, a dejected form, like a kicked puppy but I forced myself to be unsympathetic. She'll have consequences until we can be sure she is committed to hygiene in her morning routine.

So...I start the day as Meanest Mom Ever.

* My other distraction was walking outside to the driveway and seeing the door to my car wide open. In point of fact it was Patience's door. Left open. And out of four people not one noticed so the door was open all night, in the drizzle of yesterday, with my iPod and other expensive things, not to mention the car itself, available to all nocturnal wildlife, including thieving teenagers who roam the streets in packs at night.

Luckily yesterday was Sunday. Let me explain my logic there. Most people here attend church so it's possible the roaming teens are Baptists and had the fear of God put into them, which I theorize has about a 14 hour lifespan. This 14 hours period overlapped with my car and the engraved invitation to steal it and the things in it the wide open door---and overhead light---issued all night.

This is the only explanation I have for how not one thing, including the car itself, was missing, nor have I found any pee anywhere in the car (this, by the way, I attribute to cats and raccoons, not teens).

Divine intervention is also the explanation I have for how my car started when I inserted the key and turned it on.

So...I breathed a sigh of relief.

because ben's the same. this morning he was scratching his head all through breakfast. another person might have thought he had lice. but not me. i knew better. i took him to the sink and ran the sprayer on his head of (thick) hair. all of last night's shampoo bubbled up and ran down into the drain.

Florinda said…
I wish I had good news for you on that "desire to be hygienic" thing, but we're still waiting for it on a consistent basis with my stepdaughter - and she's going on 14.

Kyla said…
Doesn't that feel better? I totally griped about YESTERDAY on my blog today and, whew. I feel lighter already.
April 28, 2008 at 12:27 PM

We once left our van hatch/rear door open all day and into the evening after unloading a chest freezer from it. Amazingly, the roving packs of teenagers (who hit my neighbourhood after they're done with yours) didn't see anything they liked.
April 28, 2008 at 12:45 PM

Christine said…
you know, my cook didn't show up either today! so hard to find good help these days.

excuse me while i laugh at the absurdity of ME hiring a cook!!!!! HAHAHA

painted maypole said…
we have a tendency to leave the garage door open all night.

today is one of those days here, too... one of those days when I let MQ stay home sick, because I'm fighting off a cold and it seemed reasonable that she was, too, and yet while I've been tired and grumpy all day she has been jumping around and asking me to PLAY with her all day. sick my foot. back to school with you, my child.
April 28, 2008 at 2:44 PM

painted maypole said…
we have a tendency to leave the garage door open all night.

today is one of those days here, too... one of those days when I let MQ stay home sick, because I'm fighting off a cold and it seemed reasonable that she was, too, and yet while I've been tired and grumpy all day she has been jumping around and asking me to PLAY with her all day. sick my foot. back to school with you, my child.
April 28, 2008 at 2:44 PM

Gwen said…
I'm still working on developing some minimum standard of caring about hygiene in my almost 8 year old. She is just a PigPen. My youngest daughter, however, eats lollipops with a fork because she can't stand to be dirty or sticky. Both of these extremes are annoying ....

crazymumma said…
ohmygawd. my housecleanercookmaid did not show up today either!
April 28, 2008 at 9:42 PM

Emily said…
I'll arm wrestle you for "The Meanest Mommy EVER Award" My girls have written the committee overseeing the nominations of said award, and they have some pretty convincing arguments. i.e.: I force them to shower every other day! EVERY OTHER DAY! Oh, the injustice! And I sort of lost it, and yelled at them today when they both came in from the front yard...having left their 2 year old sister outside by herself. I may have used some expletives. I don't remember. I was yelling too loud. And I was beligerent.

Woman in a Window said…
Sometimes even the bad things can end up to be so good...like this post...you might have intended to provoke us all into laughter with the bad but I end up with a smile 'cause the raccoons chose to pee somewhere else. This is simply wonderful!
April 29, 2008 at 10:38 AM

jeanie said…
Oh it was that Monday all over the world!!!

Actually, in Proud Housekeeper stakes, that Monday has sort of slopped over into Tuesday and even Wednesday.

But I am sure your daughters and mine could compare notes on their Monday monsters - oops, Mothers.
April 29, 2008 at 9:47 PM