In the battle of the sexes, I side with backpack wielding little girls 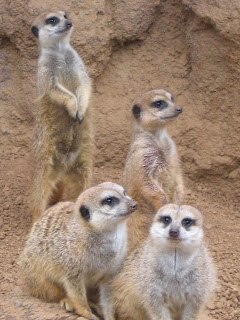 It's a savannah out there.
I was sitting in my car, by the curb, waiting for my daughter to come down the path. School was out, it's Friday, and children ran as fast as they could---not so much away from school as towards freedom.

But one pair sprinted past the rest. A girl chasing a boy. In early elementary school, and often, all through it (back in my day, anyway) it always was the girls chasing the boys. My husband swears it was the other way around. But as I recall, boys would run up, tease, and run off, with a backward glance that begged, "Chase me!"

And we did. Usually laughing. Usually.

I knew both of the children. She's a first grader on my daughter's soccer team, and he's a neighborhood second grader. The girl had an uncharacteristically intense face. Normally she has a huge smile as she runs towards after school freedom, but today her face was pinched in a concentrated frown.

The boy? He appeared to be running for his life. He spotted a tree and clumsily hefted himself up into it, as high as he could, as fast as he could.

Without a sound, the girl flung her backpack up and whacked the boy on his rear end, which dangled over the tree limb that was his perch. She yelled something, and the boy shook his head. WHACK! went the backpack again. She appeared to repeat herself, the boy refused to look down. WHACK! WHACK! WHACK! went the backpack wielded by a girl who, by all appearances, was actually angry.

Suddenly, I recalled that sometimes, when chasing a boy, that burn in my chest wasn't just from my lungs working hard in the endless rapid circling of the playground. Sometimes that burn was anger.

Sometimes boys went too far in their taunting and teasing and stepped on the girls' pride.

You could tell the ones who wouldn't take it, would never take it. Their faces, as they chased the boys, read clearly, "You're going downtown Buster Brown!" They weren't giggling. I recall pinning a boy, who a moment before had been laughing, thinking his taunt hilarious, until I actually, fueled by a burst of fury, caught him, and knocked him to the ground.

My knee in his chest I said, "Take it back! I mean it, take it back forever!"

"That will teach you!" I said with a humph, marching back to my girlfriends.

I watched that little seven year old girl giving the little eight year old boy the whatfor, and I thought, "That is awesome."

I really, really did. Make of it what you will, but it makes me warm and fuzzy inside to see little girls not taking it from little boys.

That's because I know in a few years, before they even leave elementary school, the boys, physically progressed beyond their emotional maturity perhaps, will continue those taunts, and if girls don't fight back, they'll never learn that you catch more flies with honey than vinegar, and they'll think it's okay. They'll draw around them girls who twitter and giggle instead of twisting their noses, hard, like they should when boys are cruel to them. The boys will develop a sense of entitlement to taking from and treating girls any way they like.

We think as parents that we teach our children how to be, but we must also accept just how very much outside society---mostly of their peers--shapes them too.

When I thought harder, the boy I chased and knocked down hadn't insulted me at all, but had instead insulted my best friend, who cried in response. I was avenging her honor, with more verve than I might have done for myself.

I suppose, on some level, I should have thought that the girl beating the boy with her backpack was doing something wrong, and maybe I ought to have hopped out of my car and stopped it. But in truth, I know the kids, he probably teased, and she was probably defending her honor. It seemed like kids learning to work it out for themselves. I was quite sure it would get worked out, and they'd be play buddies again before we knew it. It's important to draw boundaries and ask others to respect them, and this is how children do it. Sure, sure, we parents work to teach them other, better ways, but their peers must teach them, too. That lesson is essential.

And I know little girls are told too frequently too often in too many ways to be quiet and take it.

So I sat in my car, watched her teach him a lesson, and hoped she learned one too---a good one, one in which defending her honor was fine, being angry when taunted was fine, and not taking it from boys was exactly the way she ought to live her life.

Side note: Lest anyone feel defensive about boys, the other side of the story, how girls treat boys, etc, relax. This is, in fact, just one side of the coin, but it is a true side, and I, a girl, am most concerned with this side as I raise my girls.

Amanda said…
Sing it, says this mom of 3 girls.

Jennifer S said…
My girl did stood up for herself once at McDonald's in the play area, way up high. Two boys came down crying, and as the story unraveled, they admitted they had been trying to take her doll from her and she was just sticking up for herself. I've never been prouder. "Be nice" shouldn't be the go-to message.

Lori at Spinning Yellow said…
Yes, you go girl! We should be teaching our girls to stick up for themselves, have pride, expect boys (and everyone) to treat them fairly. As a mom to both a girl & a boy, I find myself often trying to show my son that he can't abuse his physical superiority with boys or girls. And I hope that someday, he marries a girl who will always know when to stand up for herself and put him in his place when need be. (someone just like how I imagine my daughter will be!)
April 24, 2009 at 8:18 PM

Texasholly said…
I love this.

Anonymous said…
Just so long as she doesn't get prosecuted under some dam-fool "zero tolerance" policy...

Anonymous said…
My son would never tease, hit, or bully a girl. He knows he'd catch hell from ME. So there is a bigger girl he has to worry about. ;) (We are lovey-dovey best friends still--what a lot of moms of girls don't understand is that boys are very sweet & tender toward their mamas, *and this capacity for sweetness must be preserved into manhood.*)

Seriously, though, my kiddoo's a lover not a fighter. He instinctively gravitates toward girls as friends, because a lot of the boys who are his peers? "They don't talk clearly and they want to hit," he says.

So these boys no one wants to be friends with--they need to be taught some other skills. They're not succeeding socially.
May 12, 2009 at 3:58 PM

ewe are here said…
I will be teaching my daughter to stand up for herself as need be, as well. Just as I did growing up. I whacked many a boy who went too far taunting me (or my sister) after trying to get them to stop 'politely'. They generally apologized after I knocked them over.

I will also be teaching my boys, however, that it's okay to stand up for themselves, too, if words and walking away aren't working. NO child should have to be a doormat to bullying.
May 14, 2009 at 6:18 AM