Cars, and trucks, and dirt, and bugs---that's what some little girls like

May 19, 2009
My girls are girly girls. They like their dolls, their dresses, their creature comforts. My little one prefers bows in her hair.

But this has never, ever stopped them from reaching out to traditionally "boy" areas of play. One of my favorite photos is of my girls and a couple of friends in princess dress-up costumes paying with Tonka dump trucks outside.

In our backyard, we're creating a natural habitat. We started with the pond and it has grown from there. We're planting ecosystem- and fauna-friendly plants, and trying to make sure our backyard helps the plants and animals we share our space with. This gives our children ample opportunity to delve into the world of bugs, tadpoles to frogs, crawfish (yes!), snakes (yes!) and even some cute mammals such as bunnies, not to mention our bird families.

Overall, I'd say our kids are the normal amount of skeptical reluctance to new things, but their natural curiosity leads them to try anyway, which is our general family rule.

So when we got invited to a promotional party at Ridemakerz, I was a little put off by the big focus on boys, even though I understood why it was specifically reaching out to boys. Making a car sounded wicked cool to me, even better than stuffing some bear (although my kids are huge fans of Build-A-Bear).

The party was on Sunday and my kids have not stopped with the cars since. First, they had a BLAST choosing from the umpteen million (technical number I hear is 70) body styles. Then they loved getting to choose which tires and rims, but wait, it gets better...then they found the stickers to decorate the car with and the blinged out accessories and went crazy. The guy who helped us was good about explaining the car parts---my girls now know what a chassis is!---and showing the girls how to put the car together all by themselves. 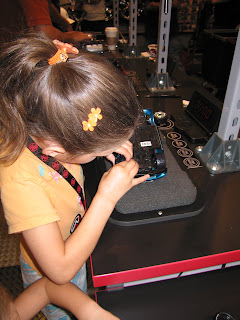 Since coming home with the cars, the kids have played with their Ridemakerz car in our cul-de-sac every day---which requires borrowing Mom's and Dad's cars for friends. I asked my kids about their favorite part and both said "making the car," which, after some investigation, meant "applying power tools to the assembly of the car." 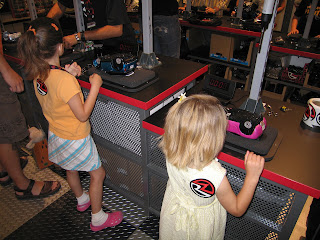 That's my grrlz, all about the Power Toolz!

Now they want their own Power Toolz.

They got to register their car on a computer, get a certificate, and even create custom license plates. 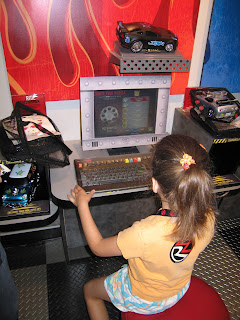 My husband was impressed that they only offered American car models, but I think he was trying to sound smart and adult because I know what he really liked was (other than the whole thing) choosing the accessories (is there a more technical term for those spoilers, bumpers, running boards, etc?) because he loitered there the longest.

My only complaints here is that our lives now revolve around their Hot New Cars, we have to play Name My Car while we drive (and I really suck at that game, just ask my brother), and they overheard our Ridemakerz guy tell us we can bring our cars back in to redecorate them.

Can we say Ridemakerz Addictz? 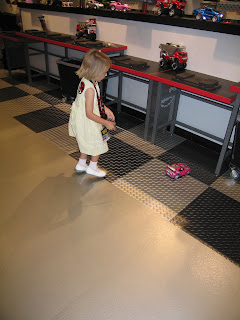 I can't explain to you why I feel better about watching my kids play with their cars, or why I like Ridemakerz better than the alternative. Maybe it's a relief to know we haven't locked our kids into stereotyped gender roles. Maybe it's good to know that remote controlled toys don't intimidate them, or they didn't even notice the store was geared to boys (the younger is very sensitive about that). Maybe I'm glad that even though Persistence chose the hot pink car, she chose it not because it was girly but because, "It looks fast!" Maybe it's because Patience chose a mini-Cooper in blue.

I think it's all of these. I just feel good to see my girls have fun, show confidence in slightly complicated toys that take tools (they just do it, no hesitation), and not even hesitate or consider that they are treading into an area girls were basically banned from when I grew up (not that this stopped either of my parents---especially my dad, who, as a race car driver on the side, was very into all things car).

But truthfully, it might be that I think it was way more wicked cool than almost anything we've done and it does my heart good to see my kids and their dad having equal levels of fun playing.

Ridemakerz has stores, a Web site, and lots of data about all the types of cars they offer, and ways to use them. You can check the Ridemakerz Web site for the details.

Right now I'm too busy planning two Ridemakerz party. Yes, you heard me. My kids decided that's the party they want this year. I'm also taking the gift card Ridemakerz gave me and putting it towards a party for the members of my mom's club. I want to give back to this great group of women but it's also selfish---now my kidz can meet their kidz in the cul-de-sac and they can all play with their own carz and leave mine alone! 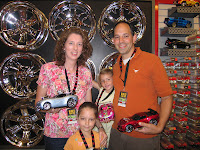 Yolanda said…
Wow. Never heard of Ridezmakers. It sounds wicked awesome. So glad P and P had a great time! I would have loved it as a child (probably still would!).
May 19, 2009 at 8:14 PM

Kyla said…
It was definitely a hit with BOTH of my genders here...and my pediatrician said that her kids are loving their cars, too. Josh is grumping a bit that he had to miss the fun and stay home with sick KayTar. LOL. I've heard, "Mooom! Dad has my car AGAIN!" a million times already!
May 20, 2009 at 8:22 AM

Melissa said…
This is the Coolest.Thing.Ever.

Magpie said…
As I said to Kyla, my husband would be fighting my girl for that toy.

Florinda said…
I know three young boys, and a couple more in their mid-forties, who would LOVE this! Even our car-obsessed 14-year-old girl (who takes after her dad) might enjoy it. Unfortunately, Ridemakerz doesn't seem to have made its way to California yet.

ewe are here said…
Sounds much more exciting than the build-a-stuffed animal places I've heard about.
May 21, 2009 at 5:42 PM

apathy lounge said…
I think that since girls do so well with "fine finger motion" skills, the object of their application of those skills (be it cars or something traditionally female in nature) is pretty irrelevant. I'm glad you're giving them all kinds of opportunities to express their curiosity and creativity. Those cars look cool!
May 27, 2009 at 9:46 PM

Cold Spaghetti said…
Whoo-hoo! Love seeing the engineering side of little girls come out and sit right in the middle of lace and bows.
June 1, 2009 at 9:56 AM

Lynnie said…
My youngest daughter has long been into transportation toys, especially helicopters and planes. She even had a helicopter on her 3rd birthday cake (it was purple with a Polly Pocket in it) and sleeps with both a rocket and a plane that have buttons that sometimes get pressed by accident when she rolls over at night! I've never batted an eyelash at her interests, either by praising her for being into something boy-ish, or by looking perplexed, or anything. But we did get our first "Cars are for boys" comment from a visiting girl recently. My response? "What does your mother drive?" Kids are such interesting mixes of so many different things. I love it!
July 2, 2009 at 5:58 AM