...and that's why it made perfect sense that the cats peed on my business suit. 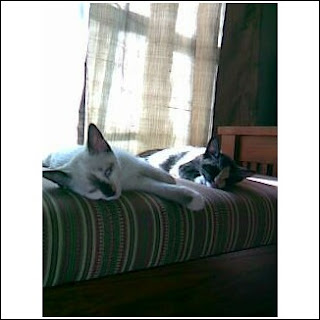 They are cute, these kittehs, but I now see that they are all a part of God's plan, my cross to bear, as it were.

As I revealed in my post about how I know I am Chilean, I believe in the fair and equal balance of good and bad, which I hope/believe I can control through the Art of Self-Imposed Minor Suffering.

If I have too good of a day or too much good comes, I'll spend the next day atoning, trying to bring my minor suffering back in line enough to mitigate any additional instances of major suffering. I'll drink my water without ice, and no flavoring of tea. I'll skip eye liner. I'll eat a Weight Watchers frozen meal instead of getting that Schlotzky's sandwich I want. I'll watch Duck Dodgers with the kids.

As soon as good news came down the pipe, I know the bad will, too. I consider myself lucky because the universe likes me balanced in the middle, and I know it could be much worse on the other end.

I could, for example, be the police officer who lost a handcuffed suspect on I-10, I could be the person who found that vicious -ism graffiti at the fire station, or I could have numb thumbs from too much texting.

I don't know why the universe operates this way or why I have been selected for this section of the Bell Curve, although I've made plentiful contributions to the Fair to Middling Writers Fund by purchasing many books with theories.

None of them know, either, but God love them for trying. It gives me hope that they do try.

That same wishful wannabe optimism co-mingled with Chilean POV is why I'm willing to believe in the space elevator but not odorless, trackless kitty litter.

I thought the universe spoke to me this week, actually. Through my purse. Which, when you think about it, is exactly the medium through which the universe ought to speak to a busy on the go woman these days. A burning bush would elicit a quick dial of 9-1-1 on the cell. An old man with long beard who is carrying a rock wold get a cash donation. But talking through a purse? That's a clever, modern God who has caught on to what we'll pay attention to.

It was this past Wednesday afternoon when my purse reached out to me. I was in a rush, hustling from one thing to the next, in crazy heat. My purse---which is really a woman-mom-worker combo case---was heavy, banging against my back. I had the beginnings of a headache, which I counted as my due for having a seriously interesting day.

I'd better get green tea, cold at least, instead of that coffee, I was thinking to myself as I muscled my way through heat so thick it felt like a new heavier gravity. Oh I wanted coffee, how I wanted it. Rich caffeine on ice with fat free soy and a dollop of French vanilla. Grande, of course.

And that's when my purse spoke to me. "Progress report!" it demanded.

Of course, I thought, of course when I have a Divine Amazing Interaction it will be incredibly practical and results oriented.

Well I still need to write an article about that health rally on Monday, especially now that I've got those photos. Then there's the article about that sexist cartoon. And schedule the two chats I have in mind. Plus prep for that contract. Oh and call The Client, the One I've Been Needing to Call. Prepare for the kids' birthday party, follow-up on RSVPs. Buy the toys for the party. Promote the circus. Followup on that call. Write two more articles, fulfill volunteer obligations, reach out to those contacts, check on that thing....wow, uh, can you check back later, Demanding Universe?

I stepped inside the Starbucks, expecting a cool blast of air, but found none. I was almost slightly relieved. This practically gave me permission to get the coffee, all things (and balance of suffering) considered.

"Progress report!" my purse demanded again, and this time, the man in line ahead of me whipped around and shot me a look. I gave the startled deer in headlights look and innocent silent shrug. He narrowed his eyes at me, anyway. I now knew, however, that this wasn't all in my mind.

Now the man's eyes widened. After another look at me, he turned away and edged forward slowly, away from me.

"Ohhhhhhhhh," I exhaled in enlightened wonder.

In front of me, the man's shoulders shook a little.

But it's not nice to ignore the universe. It will get your attention, one way or another. And that's why it makes perfect sense that later that night, the cats peed on my business suit.

Yolanda said…
That was absolutely divine, in every sense of the word.

Now get your screenwriter hat on because I feel a blockbuster coming on. A busy mom who receives divine messages via her purse?! Sounds 100-times better than Bruce Almighty.
July 18, 2009 at 12:32 PM

Major Bedhead said…
I like your theory. Makes complete sense to me.

Meghan said…
I'm not sure, but this post seemed even funnier to me knowing that we were on the phone either right before or right after this incident. LOL
In fact, I think this is so funny that I am going to locate one of the 5 Madagascar penguins that continue to float around my house and put it in my purse. Just in case the universe needs to get in contact with me.
Either that or in the dishwasher. Because really, if the universe wants to get MY attention it's going to have to be one of those two places. LOL
And you already know my feelings on kitty litter.
You rock Julie, keep on keepin on.
July 20, 2009 at 10:38 AM

Julie Pippert said…
Maggie, my life is both 100% metaphor and 100% literal, which makes perfect sense for a Liberal Arts major even if not for a math major LOL!

Jenn, awww but they are so cute, these kittehs. lol

Meghan, it has come in super handy. The kids were driving me crazy in the car one day and I whipped it out when I ran out the desire to say ANYTHING to them, and said, "Kids, here's what i say to THAT," and I punched that penguin who chirped "SMILE AND WAVE BOYS."

Major, we have balloon euthanasia and toy mercy killings here often. So I understand.

Kyla and Annie, knew you'd get it.