Anger in another language 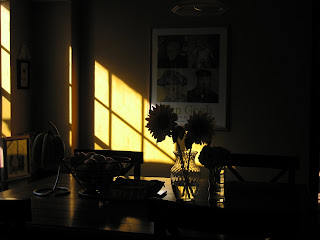 "Stomp your foot, say I feel angry! That's okay! It's not okay to hit or say hurtful things!"

If I had a dollar for every time I said that the private school tuition would be paid for.

We used to say mad. But the phrase "I'm mad" began to get under my connotation, denotation, and grammatically OCD skin.

I did not like picturing Ophelia. I did not like being put in mind of a mad bull, someone enraged; greatly provoked or irritated; angry; abnormally furious; ferocious; extremely foolish or unwise; imprudent; irrational.

Although upon reflection, perhaps mad is the right word, after all. But we've stuck with anger. Angry sounds like something you can get under control. Mad, enraged, fury does not.

My friend Becky generously loaned me her disc collection of the first season of Mad Men. I leapt into the show a few episodes into season 2. Season 1 is a real eye-opener. It also proves that this show was completely self-actualized and brilliant from the beginning.

Yesterday I watched the episode where an ad man appealed to Betty Draper's vanity and asked her to be a model for a campaign. It was all part of a different campaign entirely -- to recruit her husband from Sterling Cooper to this other firm. When he declined, Betty's photoshoot and campaign was scrapped. Ruthlessly. Without thought for her face, or any saving of it. The next day, she went outside and began shooting at her neighbor's pigeons. It's nearly too complicated to explain why, but she had her reasons.

I think it was really because he made her little girl cry and she was just that done with men and their oppression and manipulation.

I was thinking about Betty Draper when reading (again) Isabel Allende explain how Chilean women render their men utterly dependent on them domestically, pampering them like babies, thinking they are queens of the castle, without really understanding they were royalty in name only.

It's really about trying to find comfort in any perception of power in a powerless place.

I wonder how Chilean men who can't cook for themselves and mad men who objectify women into sex and chess pieces explain the current level of pigeon-shooting anger that obscures our national vision now. Pea-soup murky hazy miasma.

Choler makes me realize we have a long and lethal history with anger, we people. We understand it is more than an emotion; it is also a physical and physiological thing. In horror movies, anger summons poltergeists who feed on the fury, are attracted to it.

I wonder if too many of us in the US, in the world, have become poltergeists, attracted to and feeding off of anger.

Today I told my sister I am angry about everything. For example, I told her, I am angry that some utility company or another has been digging in my backyard for nine months. Then I laughed because it is foolish to be angry about this. It's self-pity really. But I've got a hearty mad on about it.

She said she is angry too. For example, she told me, she is angry that she ordered a necessary suit for her son three weeks ago and said she needed it by today. The store said fine, then when she went today to pick it up, the angry sales clerk angered my sister by telling her she was being ridiculous: delivery trucks only come on Thursdays.

My sister called me in the first place because she is angry about something else. I am angry about that, too. We are angry because it is, and even more because there is nothing we can do about it.

My Facebook stream and any news or blog feeders are clogged with anger.

I laughed long and hard during the moment in Mad Men when, based on an old fraternity prank, Pete and Harry decided to clog up the airwaves with Nixon and Secor laxative ads, blocking Kennedy from TV. That show. So clever. In the good way.

In a different scene, Cooper came to see Sterling, and told him to put out his cigarette, "It makes you look weak," Cooper said. He backed up his point with an anecdote about Neville Chamberlain and Hitler. Hitler planned the meeting in an old castle that forbade smoking, which cost the cigarette-addicted Chamberlain greatly. "By the end of that he would have sold his mother to Hitler for a dance," Cooper said.

"All I got from that story," Sterling said, "Was that Hitler didn't smoke."

All I got from that story is that the writers know their history. Mr. Appeasement, that's what they called former Prime Minister Neville Chamberlain. I've never before heard anyone blame cigarettes for his giving away of a chunk of Czechoslovakia to Germany but I have heard the logical equivalent of bipartisanship blamed.

But drinking and smoking are time-honored methods of smoothing over awkward social moments, and without either, I bet there were plenty in that meeting between Neville and Hitler. Of course later Mr. Appeasement had to resign, but he got a new job in in Churchill's War Cabinet, which I always thought was the embodiment of the old adage about working from the inside out, but now I wonder if it's the embodiment of the old adage about an angry dove, furious about being bitten, morphing into a hawk.

Outside of Mad Men, we seem to have lost sight of our history. Forgotten it. It's a big hole in our perspective. It means we are perpetually four year olds, relearning lessons each generation, over and over, about anti-social versus acceptable communication of anger.

and i think you are right--people ARE attracted to anger. anger, especially group anger, can make us feel powerful when we are essentially dis-empowered. anger can be a mighty agent driving change and sparking action. but anger can also make us "act out" and can (as you pointed out) simply be a from of self pity that may only serve to make us look like a pouty toddlers.

MARY G said…
This is powerful. And so true. I see the anger swirling around on Facebook and I agree with you.
I was taught as a little girl to swallow my anger -- it was not appropriate for a good girl. It equally sucked to be a little boy, because anger was okay but the softer emotions were not.
Great post!
September 9, 2009 at 8:39 AM

Jennifer S said…
I won't be going outside and shooting pigeons or anything, but I can understand that kind of frustration with men and their oppression and manipulation.
September 9, 2009 at 10:21 AM

Alicia C said…
not sure I understand this post - I'm sure it's good and all, but hell, I'm sort of detoxing from cigarettes at the moment so mind's not too clear

as to the Chilean women, yes. Sad and true. But it's not so much an honourable thing. It's a compulsion, a reflex, a lizard brain misfiring that says 'you'll be LEFT if you don't become their servant - and indispensable'

It's not noble. It's certainly not queenly. It's also passive-aggressive in that, if you can be so obviously subservient and officious in these obvious ways, it gives you space to commit all those other tiny infidelities you insist upon day after day
September 14, 2009 at 10:13 PM