My four year old dressed to the nines for our special night out to Disney on Ice. I thought she'd be unique, a stand-out. I thought she would garner attention in her plum fairy princess outfit.

What I forgot was that "costume" is the preferred style for the four year old girl crowd.

Instead of being the one, my daughter was one among many. Princesses (all of them, including Pocahontas), fairies, Minnie Mouses, and any and all Disney characters pranced in mini-form around Reliant Stadium.

My daughter had, in her ineffable way, tapped into the collective four year old dress-up girl consciousness.

As we passed these costumed sprites (and fairies, and princesses, and mice), my eyes met the other parents' eyes in a flash of commonality: we were parents with This Sort of girl child, and we were That Sort of parent, who was willing to let our girls dress up to go out, even if it was in costume. Whether we had anything else in common was irrelevant; on that point, we met and connected. Our girls had donned costumes for this special event. In my case, both of my girls did, in their own ways.

The thing about my little girls donning costumes is that very rarely are they donning a character. The costume, for them, is an extension of their own character. Persistence, my four year old, was very much herself last night. She just happened to be wearing a multi-hued wispy fairy outfit.

My kids are very imaginative and like most kids, they do enjoy imagination and role-playing games. Sometimes they use props or costumes to further the playacting, but so often, costumes are an end in and of themselves. They are something fun to wear.

And when did we stop doing that, grown-ups?

Upon deeper thought, though, maybe we haven't -- it's simply more subtle. I was wearing a deep purple cardigan over a lavender shirt, with jeans, and ballet flats. I dressed it up a bit with a big multi-toned purple necklace, with huge brooch-like dangling charm. I wore matching purple crystal earrings. What, in the end, was so different between my outfit and my daughter's? Other than hers was largely chiffon-esque and mine was cotton and denim.

The point was, we both put on costumes of a sort to reflect something we were feeling about the night and the event: we felt it was special. Something to do a little something extra for, via our clothing.

And Disney on Ice was special! Before the event, I joked that as someone who couldn't ice skate on kids' style double blades while clutching the railing, I was always going to be impressed by people who could glide on a thin blade on slippery ice.

These skaters glide, dip, fly in the air, hop on and off props, and all in all, tell an entertaining story, all while amazing us with athletic grace on the ice.

What's great about Disney on Ice, and one reason I think it works even for tots, is that it spins out different short tales, tied by very thin thread, with frequent changes to keep interest and attention. It also includes visually interesting costumes -- read: lots of sparkle -- and characters the kids know. Plus, it ends with small "fireworks" display.

The show began with Mickey and the gang, as usual. It then spun into some other snippets, most notably to my four year old, the big Princess sequence. She got to see Belle and Beast, and then every major Disney princess skated out with her Prince. They did duets and also big ensemble numbers. I loved the nostalgic wrap up of the first half with a grand ensemble of It's a Small World. The performance had the different music and dance styles, costumes from each country, and lighted floats. The second half included a big Pinocchio number, which my seven year old enjoyed. 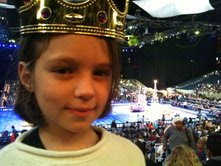 It was a good time -- a special family outing time.

In my last post, I included details about going, coupon/savings information, and so forth. If you are thinking about going, I encourage you to just do it! I've seen a few Disney on Ice shows and really like this one best so far. It's on in Houston through the weekend.

Big thanks to MomCentral, Feld Entertainment, and Disney for a good time for our family. I only take offers like this for events I think are a fit for our family. I do receive tickets as a gift, but they only ask that we enjoy ourselves and let them know if we liked it, or if we write about it. There is no deal, requirement to go to the event, or exchange of services. That I've written about it -- and glowingly -- is simply a factor of "we like this event, we enjoyed ourselves, and it was a good time for our family." But I think the photos of my happy kids show that!

MARY G said…
Ah, the dress-up years. I've now had two generations go through that phase and I love it. Little girls are such a sweet piquante combination of unselfconsciousness and pleasure in their outfit.
We did not have Disney on Ice when my girls were small, but we did have the Lippanzer stallions once, and Gilbert and Sullivan operettas. For me it was my first exposure to ballet that brought the magic.
I love it that your daughters, and you, had such a fine time. (And I wear purple, too)
November 13, 2009 at 9:27 PM

whymommy said…
As someone without a single fairy princess or tiara in the house, I really enjoyed this post. Sounds like you and your girls had a fabulous time!
November 17, 2009 at 11:14 PM

Unknown said…
Such precious pictures of your princess. I laughed more, thinking of our "costumes" from the weekend at SeaWorld in the form of matching sock-monkey slippers. May our girls always be as lucky, to find kindred spirits in matching costumes.
November 19, 2009 at 12:46 PM