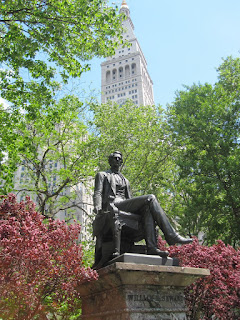 Today on an NPR story, an actor was talking about his challenges getting roles. A common theme perhaps, but his obstacle, he said, was the fact that he uses a wheelchair. He's not bothered by the fact that the actor who plays wheelchair-bound Artie is not actually disabled, "People who have disabilities or who use wheelchairs who could still conceivably play that part should have equal opportunities to audition for those roles. And if it goes both ways, then the best actor should get the part."
Another disabled performer, Alana, said that this doesn't actually happen. She said that it floors her that even open-minded producers and directors envision that disabled actors and performers should only play victims, in roles that revolve around their disability. In fact, the part usually acts out a morality play, by having the characters be charity cases, she said, heroic characters overcoming tragedy.
The disability, then, is the real character, and the actor is merely playing a stereotypical part, is how I read it. And when I thought about it, it seemed true. The reporter, Karen Grigsby Bates, ran a bit from a popular TV show, Private Practice, in which one character asks a disabled character, Dr. Phyfe, about the day he learned he would no longer be able to walk -- she characterized that as the worst day of his life. Dr. Phyfe replied that his life changed dramatically that day, but he questioned why she would assume that it was the worst day of his life.
Alana, said, "How often do you see a strong actor with a disability playing a lead role or a very prominent role?"
Grigsby Bates said, not very often. And it's true.
The theme in drama is heroic characters overcoming adversity, triumphing. It's a powerful literary and dramatic device. I agree with the news report that it would be intriguing to see differently abled people playing characters rather than disabilities, and that by doing this, it can open up audience eyes to perceiving differently abled people as, well, people, more than just their disability.
Isn't it a sort of hubris to assume that a disability is the defining moment of a life, and that by keeping on the person is heroic and triumphing over adversity? Isn't that sort of projecting a fairy tale onto an actual person who is just as human as anyone else, and worse than that, isn't that sort of projecting a Disney-fied fairy tale onto a person?
In the private practice show, the disabled character said, "There's a period of adjustment, but you...deal with it."
The actor from Private Practice is disabled. He lost the use of his legs after a spinal stroke in 2003. Grigsby Bates reports that he said "saccharin stories about how disabled characters nobly conquer their handicaps aren't the answer to onscreen diversity." He said he'd like to see roles about characters without once mentioning the wheelchairs.
In Notting Hill, one of the characters was wheelchair bound, but that wasn't the point of her role. Completely, anyway. It was a dramatic device -- an obvious adversity in a marriage, where typically adversity is not noticeable -- to illustrate couples can get through challenges and remain together. The wheelchair was, in the end, the least of it, and only briefly mentioned. The character was a friend, and I think what she considered her real adversity was the trouble she and her husband were having becoming parents.
I'd never compare or contrast being differently abled, physically, to any other perceived or obvious adversity. I do want to, however, point out that each and every one of us has had some challenge or adversity to overcome.
I'd be shocked to learn that there exists a human who hasn't had to overcome adversity. It's a human condition. Some of the adversity is visible, some not. Some of it we can relate to or empathize with, and some we can't. Some people experience what we think of as the worst thing that could happen. But it's all perspective.
My ongoing thematic challenge with "triumph over adversity" is that often it is mired in this idea that one "gets over it." Perhaps if we all acknowledged that something that is truly adversity is something that one must "learn to deal with" as the character on Private Practice said. It can be an ever-present thing that flares into a challenge at some points, and fades into the background at other times. perhaps then we can all acknowledge that each effort to deal with it, whatever it is, is heroic, and at base, is a person who just feels like a person, like any other person, then maybe we can set aside the fairy tale.
And maybe, just maybe, decent casting of good actors, regardless of physical ability, could help with this. But truly, I think anything could be the catalyst if we let it.
What do you think? More parts for good actors, even if they might be in wheelchairs? Is the fairy tale and heroic depiction of triumphing over adversity useful and right or deleterious?

Magpie said…
In addition to the guy in the wheelchair on Glee, there are two small recurring characters who have Down syndrome. For real, not like wheelchair dude. I think that's a good thing.
May 11, 2010 at 11:49 AM

Celebrating 12 years, PASW is a year round, Monday through Friday, progam that teaches acting, music, dance and technical disaplines for film, TV & theater. They also produce original material for all mediums. 7 years ago, PASW opened its Talent Management division and has booked almost 900 roles for their clients in TV, film, stage, commercials, music videos, print ads & voice overs. It's truely a one-of-a-kind facility, found nowhere else in the world.

Most importantly, PASW builds self esteem,confidence and social skills that their clients with autism, Downs syndrome, CP, MS, MR, and countless other developmental disabilities have.
May 11, 2010 at 1:04 PM

Deb Rox said…
I actually think about this type of question a lot, because I love storytelling and Jungian archetypes, and as a writer and reader/viewer I think even very human conditions (disabilites, being gay, gender, age) can be useful symbols of, as you said, challenges, or of other qualities. But then again, they can become stereotypes or exploitive catchalls. I do wish the television and film industry saw actors in a more diverse light with people with differences simply appearing in rolls that didn't highlight their differences. I used to watch Law and Order and remember them doing pretty well with this, but don't know if that's still true. I know I love it when a character is fat, but just IS, you know, because some teachers-lawyers-moms-crossing guards just ARE, and not because the show wants to have an episode focusing on it.
May 12, 2010 at 9:23 AM

Yolanda said…
It’s one of the things that I’ve always liked about CSI Las Vegas. The actor who plays the chief medical examiner is a double amputee and walked on prosthesis with the aid of canes. They have never had a Very Special Episode that explains why he uses canes or limps. He is not The Heroic Disabled Doctor. He is simply, the doctor. It’s matter-of-fact. And the actor does a damn fine job playing the role, and has done so for almost a decade, now. As it should be.
May 14, 2010 at 4:36 PM

Julie Pippert said…
I think too much of the arts has slacked off into "clever" which is actually lazy depiction. It's so rare I am awakened and refreshed by a True Character Role.

When I read The Help recently, I was so impressed, not the least of which was the ability of the author to marry true characteristics that truly humanize a person.

Yolanda, so true about that show -- yes, absolutely. it just *is* and isn't that really more true to life anyway?

Deb, I agree that archetypes are useful. I think the most intelligently artistic way to manage them, though, let them be the symbol and then a regular human being. KWIM?

Maggie, yeah, true and well-done I think. It's interesting that Sue is the character who interacts with both, and so differently. One furthers her as symbol of our culture and the other humanizes here. I love that show! LAYERS!!!
May 18, 2010 at 12:01 PM