The Slacker Cook Triumphs Once Again With Crock Pot Cooking

December 07, 2010
It finally got cool here. I know, highs of 62 barely qualify as cool but there you have it: our average winter low here. It feels like early fall to me, and so that means I am whipping out the crock pot (and anyone who knows me knows how I love my crock pot: it's mass amount cooking, everything and the spice cabinet, tasty, aromatic, slacker cooking -- in other words, all my favorite ways to cook rolled in to one!).
When I pull out the crock pot, I tend to also pull out a vintage cookbook. 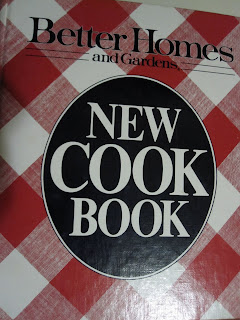 My stepmother gave this cookbook to me in 1989 when I moved into my first apartment -- solo living, like a real grownup, with rent, utilities, and everything. 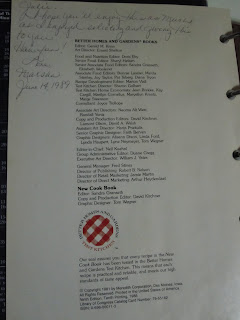 It's like feeling that taste of independence, doing it my way, anew. All while getting old-fashioned comfort cooking.
You know what I mean?
So, of course, my first foray for crock pot hot meal cool weather cooking is...chili.
Hey. It's Texas.
And of course I use a recipe straight out of this cookbook called Chili Con Carne. 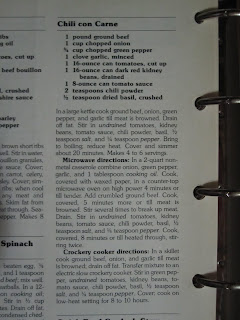 Except I don't use it straight because, well, to tell the truth recipes sort of make my eyes cross. I skim them to get the gist and then I wing it. Seriously. I have a pretty good sense of ingredients and how to put them together, and I also have a habit of cooking on the fly which means substitutions. To complicate things further, I often don't like some ingredients called for, so I'll eliminate or substitute. Plus, I prefer lower fat choices. And of course, I'm a Slacker Cook so everything has to be simplified, steps eliminated, corners cut, and so forth. Also, key? LESS DISHES. Means less cleaning up to do.
So how does the Slacker Cook modify an already pretty easy recipe and make it healthier? Here we go: 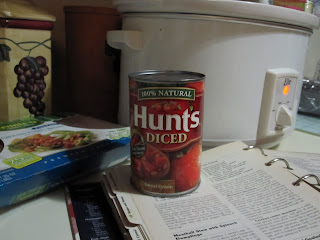 Substitute: turkey for beef
Substitute: all that complicated and messy dicing and chopping with already diced and seasoned tomatoes and onions
Substitute: green pepper with red pepper, add in a splash of tabasco, and dump in grape tomatoes sliced in half, then about five minutes before serving, blanch some fresh spinach in there
Substitute: kidney beans with black beans
Substitute: all that cooking and browning in another pan with cooking the turkey in the crockpot, prewarmed on high, with some delicious chili sauce
Then dump in everything and cook.
I like to serve it with cornbread. My husband is pure native and puts his chili over Fritos.
Either way, YUM. And easy. And a good chunk of the week is DONE.
Now here's the thing: this is healthy.
You know where I stand on making healthy choices -- I do it for me. I do it to be there for my family, for my kids. To set a good example of healthy eating, even if you are a Slacker Cook like I am.
So...once again, the Slacker Cook, with an eye and heart toward healthy eating, triumphs once again with crock pot cooking.
This post brought to you by ConAgra Foods, specifically Hunt's, who asked people to share recipes they make using their products, namely tomatoes. The recipe is from my own cookbook, the modifications and opinions are my own, and are all true. I really am a Slacker Cook, I really made this dish exactly as described (using Hunt's Tomatoes which I bought on my own and already happened to have on hand in my pantry when themotherhood.com asked me to join in this recipe parade, and my family really is eating it for dinner tonight. You can see other recipes here.