Why I Will Miss Mary McCormack Most of All 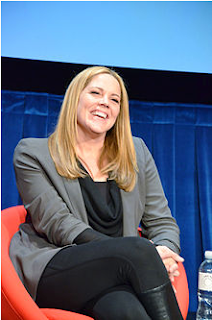 As this year becomes the year of trying to stuff women back into their boxes, I find TV shutting down its very best examples of inspiring women who never even had a box.

It makes me sad.

Missing, starring the oh-so-fab Ashley Judd, was not picked up for a second season. I suppose a super hot, smart and capable middle-aged woman was just too awesome. Or. Not politically correct enough in 2012. By which I mean, she wore a lot of pants (and hats, metaphorically) instead of being decorous in a flowery dress. (Bitter much? Why yes, yes I am these days, thank you for asking.) I say BOO on this one. I liked that show. Yes, I am a Judd fan, but also it was exciting. Former CIA operative running (usually literally) around Europe to save her son, constantly outwitting the doubting potential allies/enemies.

The Closer, starring an increasingly skinny Kira Sedgwick, is living up to its title and closing. This is an easier goodbye. I used to love this show but the skinnier Sedgwick got and the more clothing tailored her main character, Brenda Leigh Johnson got, also the more boring the show got. By this I primarily mean that as the show has progressed, Brenda was increasingly "beautified" and her formerly complex and maddening yet lovable character became more and more one dimensional. I used to love this show. I loved her cleverness. Her balance of strength and weakness. Her hats and goofy Southern-Sunday-Go-to-Meeting-Meets-LA-and-Cop Shop outfits. Her incredible competence alongside her slight lapses into total geek. She was like the perfect yin-yang character and show. But, as is common with shows that center around a strong, smart woman, the show devolved her rather than evolved her. And here we are with this season. Instead of her leading everyone by the nose, her immediate circle has closed in around her, trying to protect her from herself as she implodes. Yuck. Yes, end it. End it now before I hate it.

Worst worst worst of all is losing In Plain Sight. An intriguing twist on the neverending story (law and order), this one included some crime, some mystery, some solving, but mainly the human story of lives disrupted.

So it had a good, solid story line, good character development and strong, consistent core of "what it was" that it held true to, but what I really liked about the show and characters was the unapologetic non-compromising truthfulness of it. Mary (Mary McCormack) started as a tough, emotionally-challenged, closed off character, and she stayed that way. The writers never threw in a bunch of "we'll teach you your lesson and soften you up missy" crap awful preachiness that writers usually love to throw at strong female leads. Oh she went through life and all of its accompanying "may it be interesting" curse sort of events but she is who she is.

Mary also had a great interplay with the male co-lead, her partner Marshall Mann (Fred Weller) (is that name awesome or what) (it so makes him...just the dude sidekick, the way women are so often the just the chick sidekick, but, as a great actor, he made it into a role you just adored). But they never "Moonlighted" it, ruining the show and its characters. Instead, the friendship shifted, as Marshall struggled to balance his traditional BFF role in Mary's life with that of fiance to a woman he loved. And it worked out. I left loving it, and them.

In the final season, Mary was a single working mother trying to figure out the way to parent and be a marshal. She showed the way so many of us moms feel, and most importantly, she looked the way so many of us moms look. Really. When she was pregnant in the show, she was really pregnant, all over. The show blended real and storyline beautifully, and nobody asked her to do a Beyonce and look like "miracle OMG you'd never know she had a baby two days ago." Praise jelly belly. She looked and acted just like a real woman, not some sanitized version of a conceptual female.

(Note to Hollywood: No, real women don't fantasize about looking like a swimsuit model within days of giving birth. That's not the mirror we want held up for us. That's what you keep telling yourself and telling us that we want but we don't. We want you to hold up a post-partum Mary McCormack and say "see, a little leaky and slightly too fleshy with a shower past the okay by date but STILL AWESOME." We know how we are really and we want you to hold up a mirror and show us how that's OKAY. If I'd been writing for the show, I'd have had her pull out a pack of wipies, swipe the pits, re-apply some Secret -- heh heh product placement -- and say "good enough" like I did a time or two.)

What the show did was give us a woman who measured herself by her own standards, not some arbitrary what makes everyone else more comfortable because it meets our expectations. As a result, even though it was occasionally tough, uncomfortable, annoying or all of the above, she stayed true to herself and we came to realize that who she is is not made of wrong and she doesn't need a self-help course. Maybe it is us, the culture, who do, in order to broaden our definition of okay.

I'll miss that. Most of all.

Kathryn (@kat1124) said…
I wish I'd ever seen this show, Julie. I do, however, love your uses for wipes because really? There is no end to the things we can do with baby wipes! And I have totally used them for the purpose you described.
July 12, 2012 at 4:40 PM

Bob said…
My partner and I LOVED this show. Seemed to not get a great shake from our Canadian network, and I'm sad it's gone.

The rapport between Mary and Marshall was great, and it was just an enjoyable show. Ah well, there's still one more season of Breaking Bad...
July 12, 2012 at 4:48 PM

Julie Pippert said…
Kat, I am sure you can eventually pick it up on Hulu or similar. I suggest it! But AMEN on the wipes. I carry them with me always. It's like my version of my dad's addiction to Windex.

Bob, I did really like it and also think it got the overlooked dark horse rep. Loved the rapport between them!
July 12, 2012 at 5:03 PM

Diane Court said…
You can't tell me you didn't feel a twinge every time Marshall searched for just the right word, delivered correction - of usage, grammar or just the right word - as an aside in the dialogue while Mary rolled her eyes? In Plain Site was one of the few series where I easily identified with more than one character, while each held their own in a beautifully paced story line. This one will be hard to replace.
July 13, 2012 at 11:00 AM

Mommy's Wish List said…
Gah, I miss Mary so so much. Hands-down my favorite woman on tv of all time forever and ever. And I miss Brenda Leigh eating HoHos out of her desk drawer wearing yet another awful but endearing outfit. And why CAN'T we have Ashley Judd on tv? The more Ashley Judd in the world, the better it is. And for that matter, I'm no longer watching The Today Show AT ALL since they threw out Ann Curry.

Non-traditional girls have just as hard a time in real life finding acceptance in the larger society. So this is just Hollywood reflecting real life, I guess. We'll never see ourselves for very long or in very great numbers on tv.
July 14, 2012 at 9:02 AM

Anonymous said…
Hello, i read your blog occasionally and i own a similar one and i was just curious if you
get a lot of spam feedback? If so how do you reduce it, any plugin or anything
you can recommend? I get so much lately it's driving me insane so any assistance is very much appreciated.
My page koi fish pond
July 21, 2012 at 2:25 AM