Actually, if I'm honest, I do hold grudges

May 03, 2006
I had to go get some Real Photos printed today so I went to the Quality Processor. It's a mom and pop shop, not a corporate conglomerate. This is where people who are trained and know what they are doing, know how the inner workings of their equipment function, and know how to develop film, all the principles involved, etc. work. These people are mainly photographers working to earn enough to buy another macro lens, for example.

(I'll forego comparing photographers to druggies in this way---working only for the next score---but I'm sure you can connect the dots. LOL Oh yeah, and of course, present company NOT excluded. I sink everything I earn right back into the business.)

Since I was going there anyway, I took a roll of film I've been hanging on to for quite a while. I was hoping they could save it.

Almost a year and a half ago, I took some really important and special photos. I photographed the newly finished nursery that I spent days custom painting and stenciling. My husband took one of the only photos of me pregnant with my now toddler. And the rest I took of my precious cat, who has since passed on. I knew she was at the end of her healthy days and I wanted to capture those moments.

I made the mistake of taking the film to a regular old processor---Walgreens as it were.

I came back an hour later to get my oh-so-important film.

The gum-chomping, ponytailed "photo tech" handed me back a strip of film, "Um like your photos didn't go through," shrug, "Like, I don't like know the problem but umm sorry, no photos for you."

I bit back my real response and instead asked, "What did you do?"

She tried to blame everything from me, solar flares, the film, my camera...everything but her own incompetence. I know just enough to suspect that was the real culprit.

But I hung on to that undeveloped film. Undeveloped, it had potential. Maybe I could save it. Maybe the photos weren't lost.

I sat it on my jewelry armoire and looked at it every day, more poignantly after my cat passed away. "Those are the last good photos of her," I'd think. Somehow, sitting there, on an undeveloped roll, I hadn't lost anything, not yet anyway.

Today, as I headed out to the professional place, a little voice reminded me of the possible photos on the undeveloped-maybe ruined roll. The little voice encouraged me to take it with me.

The yin met the yang today.

Three people worked for two hours to save those photos. They are grainy, too light, faded images. But they managed.

And they explained how the Walgreens girl ruined the film.

I felt the anger surge and then leave me. I realized somewhere in me, I knew I'd been wronged and I had been holding on to it.

Their work and kindness---not to mention success saving the photos---balanced it out in the end.

So I released the grudge. And I have the images, digitally, that I can work to tweak and rescue. 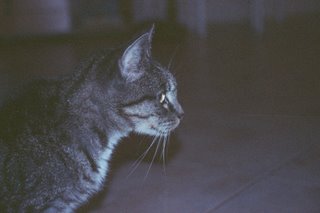 After starting the tweaking, some level and sharpening work: 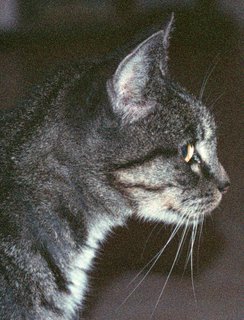 kaliroz said…
I hate it when my film gets messed up.