When the Husband and Kids are Home Alone 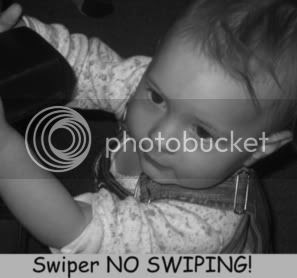 Lest you think that the crazy daisy life is unique to me in this family, let me share my husband's Friday morning. Also, this proves beyond a shadow of a doubt that the act? It's ALL the kids. They would do as they do regardless of who is in charge so WHEW blame is off of me.

First, as usual with me, a little background.

All week long, actually two weeks with this past one being the worst, I have been questioning how much life likes me in this town. I’m liking it fine, but so far, so sick. As a dog! After a series of unfortunate events and doctor interactions, it was universally agreed it was time to Escalate my Case to the Experts.

So Friday morning the allergist, his nurse, about 65 needles and I spent some quality time together, seeing how many huge welts we could create on my back (for the record, quite a few!).

This meant my husband, the actual father of our children, was left Home Alone to get himself and the children ready to go for the day All By Himself.

Never mind I do this every day.

I arrived at the doctor’s office slightly before my appointment at 8 a.m. and by 8:30 my husband and I had already spoken on my cell phone twice. The nurse got to be a party to the second call and who knows what she thought of me hissing into my phone, “Listen, I’m at the doctor’s with the nurse now and I can’t handle this, you’ll have to figure it out.”

Not that I was unsympathetic.

I never even once thought, “Great scott, it’s just two small girls. I do it every day, it’s not rocket science. Just get them ready and go.”

This is because I know my children.

His first call was, I think, actually a panicked outreach as he watched his careful, “I can do this, it’s only two small girls, we’ll just get ready and go” plan unravel. Really, I know the feeling. Well.

While he was on the phone with me, as is typical with my children, Disaster Struck. Unwittingly, poor Dad had set his coffee cup on the counter by the phone. The baby can reach that high now! And lo and behold, she did. I suppose she thought she needed a morning boost (although really, not sure when her energy meter ever dips below Manic anyway), so she reached to grab Dad’s coffee cup, succeeding in spilling it all over herself and the carpet.

My poor husband then had a screaming baby to clean, a floor to clean, and no coffee to boot.

Outfit number two and a strong scent of carpet cleaner later, he moved on to the next portion of the morning: attempting to get out the door to the sitter’s.

This prompted the second call. The sitter was running late, and thus my husband would miss his first morning meeting and be pressed to make his second.

Again, I knew he knew I could do nothing, but hope springs eternal, and moreover, I was the one person in the world who would really understand his pain. That he could call. Before 8:30 a.m.

The third call came later in the day. It was as I was preparing to leave the office and pick up the children.

“I just thought I ought to warn you,” he said to me.

My stomach sank in a revoltingly familiar way.

“Sweet pea is probably going to be very upset about a lizard.”

“Yes. I’m afraid the baby ummm killed it. Sort of violently. It was ummm disturbing. To say the least.”

“Okay…” I said, really hoping the story ended there. But no, once again, my beloved partner wants to share everything with me.

“I was trying to remember all the bags and things to put in the bag and get out the front door. The kids went on out. Sweet pea found an anole and was following it, little running commentary, in her usual scientific style. Well, that of course attracted her sister. Who had her sippy cup…”

I immediately saw where this was going.

“The baby giggled and ummm errr smashed her cup down HARD on the lizard, right on the head. I don’t think it was instantly killed. Its jaws sort of opened and closed a few times, and it looked pained, with bulging eyes. It was just a baby one,” he added.

We were both silent, picturing a poor baby lizard, killed. And more silence, pondering our youngest, aka Baby Lizard Clubber.

“Anyway,” he went on, “Sweet pea was screaming and screaming and crying and hysterical. I think she called her sister a bloody murderer. I didn’t correct her.” DH was rather a Dr. Doolittle as a child and is even more horrified than I am at our children’s propensity for violence towards animals. “She was pretty upset and she’ll probably mention it to you, want to go see the corpse.”

Sweet pea is nothing if not practical in some senses, and scientific in all senses. Once a creature is dead, well, no harm no foul in additional investigation. If you take my meaning. And I am sure that you do.

“Hmmmm,” I said, trying to think of a way around autopsying an anole in my front yard in the hot and humid afternoon. “Thanks for the heads-up.”

“Sure,” he said, “They’re in fine form today so have a nice afternoon.”

“Don’t forget I’m going out with the girls tonight,” I reminded him, “So you are back on Dad Duty when you get home. Maybe I’ll tell Sweet Pea you can’t autopsy during the day,” I added evilly.

We romanced goodbyes to one another and hung up.

Even without having to make lunches, clean up breakfasts, fill a diaper bag and backpack, schlep a Mt. Everest expedition’s amount of stuff to the car, with two small children dragging on my legs, it still took me fifteen minutes to carry myself to the car to go fetch my precious darlings from the sitter.

And they? Were having too much fun to leave. So I sat and watched them play with their friends and favorite toys, remembering how it felt, somehow, to be 4, and relishing the attention of a Big Girl

When I finally coaxed them to the car, Sweet Pea had had such a fun day, I think she forget all about the lizard. She chattered about dress-up and playdough and grilled cheese and puzzles and madeup games and on and on…

And me? You bet I didn’t even ask.

For the curious: my husband survived his evening duty and even woke up remarkably chipper this morning. I did notice his coffee cup was left high up and far back from any edges though.

Donna @ Snowbound said…
You Rock! I could totally imagine this whole episode. You are a great storyteller.
June 12, 2006 at 3:31 PM