September 17, 2006
I'm just a blogging fool lately. What can I say...I must be getting sleep and the brain is working. Another factor might be that the kids are back in school (THANK YOU GODS OF SMALL CHILDRENS' SCHOOLS!) and I'm back working where I do things like THINK! and READ! and WRITE! and INTERACT WITH ADULTS! and LISTEN TO NPR! My personal favorite remains, of course, PEE SOLO!)

So, what with all this time to think and read and write and all, I've been blogging a lot. So don't just read this post...skip down a bit and read the last few. They have come bang bang bang---multiplying like naked baby dolls in the night.

I had prepared a headline review for today. The headlines of last week were startling...distressing...and something I want to process out loud (by which I mean writing in my blog). It had struck me as "funny" (by which I do not mean amusing in the least) that just when I had decided the Catholic Church and I were just not going to work out (see Fish or Cut Bait, Lady) Pope Benedict climbs aboard the Good Ship Naive (or maybe it was the Good Ship Crazy Like a Fox...my vision isn't what it used to be) and spurs on two suicide bombers this weekend.

I had also prepared a post about autism. This was in response to Her Bad Mother's challenge to write about Something We Care About. Although it actually comes from Greenstone and has led to the blogworld's version of the Great Peanut Ban debate...I was going to write about it. Just because I welcome any chance to illuminate on certain topics.

However, those will have to sit in my Drafts folder.

Today I am going to tell you about a book that happened to jump in my basket at the library---for reasons having nothing whatsoever to do with 9-11 (which is when I was at the library, trying like hell to avoid the day altogether by being Stubbornly Normal)---and which kept me awake last night.

This book will probably randomly strike out in my mind for some time to come, oh say any time I listen to the news or ponder pretty much any emotion related to feeling confined (there's much less freedom out there, to say the least), under-served (I don't worry about any suicide bombers when I go to McDonald's with the kids on a crazy rainy day), oppressed (hey I can drive a car down the street without being harassed), a sense of anger or loss (my life is cush by most comparisons) or so forth.

What book has aroused me to such a state? 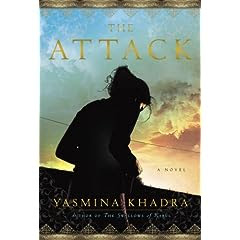 The Attack, by Yasmina Khadra.

My criticism---it lacks originality of prose and eloquence--matches other criticism I have since read, but might well stem from the translation issue. There is a sentence, "She was horribly exercised with me," which I think was actually meant to be, "She was horribly irritated with me..." Little language flaws and so forth like this might really detract from the author's original prose.

But that is so very small in the grand scheme of this book.

Le Figaro states, "The Attack is a mournful detonation...to read it is to undermine your tranquility, and you can't tell whether the shiver that goes through you at the end is a sign of anguish or relief."

From The New Yorker
Dr. Amin Jaafari, an Israeli Arab, seems fully assimilated into Tel Aviv society, with a loving wife, a successful career as a surgeon, and numerous Jewish friends. But after a restaurant bombing kills nineteen people, and it becomes apparent that his wife was the bomber, he plunges into the world of Islamic extremism, trying to understand how he missed signs of her intentions. Khadra (the nom de plume of Mohammed Moulessehoul) vividly captures Jaafari's anguish and his anger at the fanatics who recruited his wife. The Israelis don't escape lightly, either, as their army marches over law-abiding Arab citizens in an attempt to stamp out the militants. Khadra's writing has a tendency toward cliché, but the book's dark vision of the conflict is powerful.
Copyright © 2006 The New Yorker

It is a very powerful book. I promote it here because it is the most emotionally evocative and thought-stimulating book I've read in a while. Maybe since The Sparrow or Bel Canto.

That's big words from me. See, I think The Sparrow is a perfect book: amazingly well-written, heart-clenching characterization, fantastic dialogue, an incredibly propeling and compelling story, originality of thought and prose, and so on. It is, quite simply, not just technically perfect, but a fantastic read. I throw Bel Canto in to the same bucket. At the end, I felt depressed that the book was finished. I missed the characters and story.

I think The Attack isn't quite the same as The Sparrow, but it is brilliant in its own way...sort of like Bel Canto. Very complicated and shades of gray. Challenging to your perception of Good and Bad.

It's a very personal view of a media-frenzied, global history situation, and it's easy to get so caught up in the narrative and fast-paced story that the little nuggets of this is much bigger and more complicated than it appears resonate only quietly while reading, but strike you full-force later.

Am I being too general? You'll have to go read. I have a strict No Spoiler rule.

By making the main character an "assimilated Arab" the author overcomes a potential lack of relate-ability to a broad foreign audience, many of whom might consider major characters "enemies." Through Amin's eyes---which are believable to white privileged Westerners---we get to see the town of Jenin under siege, pester an immam in Bethlehem, and confront racism in Tel Aviv.

Not to mention, of course, that we can all grasp the universality of human suffering.

I find myself thinking back and realizing how cleverly the author sucked me in with the intensely personal narrative of the alternately very self-aware and naive Dr. Amin Jaafari. How I cruised over global politics, paying more attention to Amin's tightrope---how lines and sides are more ambiguous than you think, how you can never be sure who subscribes to what, and how dynamic and disorganized the organized factions are.

Amin Jaafari is the perfect character because he has a cataclysmic catalyst that drives him to rush through an agonizing series of events, all while reflecting on who he is and what he believes, how he got to be where he is, and what has happened to his land in his lifetime.

Plus, you care. Really, you care. You care about Amin, his friends, his relatives, you understand him and the others through their own and others' eyes.

It's complicated. I don't feel like I'm doing a good job of explaining it. Probably because I'm still processing and trying to speak in generalities.

It’s his story, and it’s history. It’s a compelling book because it mingles the two, without you realizing you are getting a dose of history in with his story.

The jacket says, “From the graphic, beautifully rendered description of the bombing that opens the novel to the searing conclusion, The Attack portrays the reality of terrorism and its incalculable spiritual costs. Intense and humane, devoid of political bias, hatred and polemics, it probes deep inside the Muslim world and gives readers a profound understanding of what seems impossible to understand.”

I agree with: graphic description, incalculable spiritual costs (the many types of victims of terrorism---direct and indirect…and the victimization that leads to more victimization), intense, humane, and probing.

I don’t think it is possible to completely suspend bias, but I do think the author works to be fairly even-handed in presenting all sides. I also don’t think we can ever fully understand terrorism---I’m not sure even the character does. In fact, I think an event at the end is meant to illuminate that there is no general understanding to take away.

If you liked this sort of thing…go, get, read.