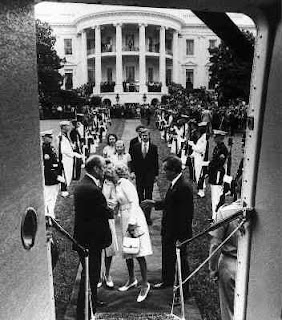 Point 1. I find it richly ironic, or maybe oxymoronic, that after so ably defending the invasion of the unfettered and non-oversighted Homeland Security into American citizens' private business without notification, cause or warrant with this:

"If you've done nothing wrong, you've got nothing to hide, so you don't need to worry about anyone poking around in your bidness."

Bush claims executive privilege to protect his own "bidness" which is under legitimate legal, with cause, scrutiny.

Glenn Greenwald explains it much more eloquently than I can in his Salon article, "The president's oh-so-noble reliance on "executive privilege"

You can also go to the White House Web site and read transcripts of all press conferences, briefings, and gaggles. I find reading it better in many ways.

Point 2. This sort of thing is exactly why I am acting like a Patriot these days:

From the War Room by Tim Grieve

Bush: Gonzales has my support

George W. Bush has just spoken on the prosecutor purge. Short version: He's "confident" that Alberto Gonzales acted "appropriately," even if Congress received "incomplete and at times confusing" information about the firing of U.S. attorneys.

When a reporter noted that Gonzales doesn't have much support left on Capitol Hill, Bush said: "Yeah? He's got support from me."

Disregarding the commanders on the ground: That would be wrong, right?

George W. Bush blasted back at House Democrats today by saying that the Iraq war withdrawal plan they passed today amounted to "an act of political theater" in which they "voted to substitute their judgment for that of our military commanders on the ground in Iraq." It was a nice line and all, but perhaps it wouldn't be a bad idea if the reporters who go about quoting it tonight mention that the president had to oust his own "military commanders on the ground in Iraq" in order to find some who agreed with his plan to send more troops there.

What happened to his grand plan to get along with Democrats?

Point 3. I'm thinking that while the NY Times has long been the Big Dog, every man's hip paper no matter that he lived in Idaho [cue theme from Chariots of Fire] it's losing its place...perhaps it got too caught up, looked over its shoulder one too many times, I don't know. It's not like a dark horse or anything, but lately The Washington Post seems to be leading the pack. I haven't decided whether I think this is a good thing. However, I'm not too thrilled with the Times just now, especially after I learned about this.

Maybe I'm just too frequently too disgusted with journalism.

And on the lighter side...

Point 4. This is almost unbearably hilarious, probably because I can so identify with it, on both sides. LOL

Bonus: Just to show how very perverted my sense of humor is, I could NOT stop laughing when I saw this commercial on TV:

Bones said…
As you know, Queer has a different pronunciation in New England than elsewhere. And in a fit of 5-year old rage, I made a sign that proclaimed "Dad's A Quayre" and stuck it on the fridge. They didn't stop laughing for hours.
March 24, 2007 at 3:06 PM

As for Bush, I can't stand the man. At a visceral, gut-wrenching level, I simply detest him. He represents everything I can't stand.

So... for that reason, I can't watch or listen to him.

Gawdsake, I hope he never sets his beady little eyes on Thailand!

Girlplustwo said…
it's so true. so true. this old boys do what i want never apologize never admit wrongs is their incredible downfall. the ego has eaten the head.

kim said…
I cannot begin to comment on the Patriot Act or I will rant without ceasing.

I find it ironic that mainstream media continues to claim that because bloggers do not have professional standards ethics and objectivity will be abandoned. Luckily we the example of the NY Times to set the standard.
March 26, 2007 at 4:28 PM

Julie Pippert said…
Bones, LMAO. I bet you were a real kick for your parents as a kid. Kind of like...oh yeah, my very own kids. LOL

Speaking of, NO JOKE, and she did not even know about that sign...Patience delivered first to her father and then to me a fairly disturbing drawing wherein the parent was on the ground with her standing over, foot triumphantly on our back. Talk about a power reversal statement! MAN!

Chani, whenever anyone says Bush, I feel a strong urge to cross myself and say, "God Help us." And I'm not even, you know, an actual practicing Catholic or anything.

Kim, tell me about it. Yeah that freaing cracks me up. One major news channel goes to court to get the LEGAL right to lie, and not even have to provide notice or explanation (which I guess would undermine the lie, eh) and the rest just do it anyway, either through ommision or intention.

I don't have foil on my windows or imagine black helicopters overhead (those are actually real, I checked, other people see them too). Yet. LOL I just sound like I do. Sometimes. LOL
March 26, 2007 at 10:57 PM