The irony is that hell froze over...on EASTER

That's it, folks. I've hit the big 35 lbs gone. I was going to celebrate by flashing briefly a photo of myself from the fashion show---preferably in the gold sparkly suit (so not me)---but my friend keeps citing "work" and "busy" as reasons for not emailing me the photos she took.

Yes, so busy we had time for a two and a half hour lunch yesterday. ;)

To assuage your disappointment, I will instead flash a brief series of photos of the kids from Easter.

Before the photos, I need to provide a confession, a caveat, and a note.

One confession: I forgot my camera and so my mom used hers for all the photos---this is a problem for everyone because it meant my inner bossy control freak kept annoying us all.

One caveat: My children hate the camera, HATE it, and ABHOR being photographed. Every single photo in which they look at the camera involved a bribe. Suffice it to say that unlike in years past when I confiscate all candy, they got to keep all candy.

One note: The children are wearing sweaters. For you superstitious, conspiracy-theory, end-of-world types, this is a crucial signal. It indicates that HELL FROZE OVER. Yes, that's what I said, HELL FROZE OVER. It was wicked cold here. In fact, it SNOWED nearby. It does not snow here. It does not freeze here. This is the SUBTROPICS. They said "cold front" but I admit I always scoff when they say cold front. That usually means the temp drops five degrees from 85 to 80. And, in fact, Friday it was about 80 degrees. But then a cold wind, a real one, blew through. We were out in the woods of the hill country and it was even colder there. It actually really and truly got down into the 30s. I was caught unprepared. As a concession to the alleged "cold front" I brought the little sweaters and windbreakers for the kids but they still cried about freezing to death. For myself, I had only brought tee shirts and a denim shirt/jacket. As a result, it was the fastest egg hunt outdoors ever. 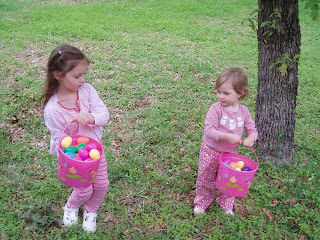 Sizing up the other's haul. Noting the disparity. I'm just snapping photos as fast as the camera and my frozen fingers will go, so I'm caught unaware when Patience offers to dump some of her eggs into Persistence's bucket to even the score. I know, I mean, how nice is that? 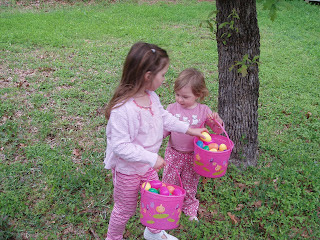 Despite my numb hands, my mom reflexes are still fast so I quickly suggest handing the donated eggs over one by one. Shockingly, the girls agree. 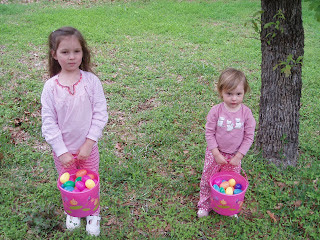 And there they are, after the fact: the cutest, sweetest, most loving little girls who could ever drive you stark raving nutters.

And for a bonus, I'll include the fancy dress photos. These were taken before leaving the house. I have learned my lesson. Take photos first, always.

Because we went to the family-friendly service (which is the second service) there was still one more service to go before the church's egg hunt, so we had a while to kill. We thought Starbucks was a good idea. No, it's not. First, it's a casual place, not a fancy one. Second, they serve drinks there, ones that stain. Permanently. Take it from me, warm chocolate can be spat out so forcefully that it spatters everyone in the vicinity. And there is no getting that out. Ever. Apparently. Trust me, I've tried it all.

Luckily I had a spare change of clothes for the kids. Luckily Starbucks has a nice, large restroom. I changed the kids, and spotted the beautiful dresses the best I could.

Unlucky was the lady waiting outside the bathroom for a very long time.

Unlucky for me was her dramatic sigh, headshake and eye roll. Dear Lady: Hey I have no need for such dramatics, but you know? I hear they are shooting a movie up the road and maybe the spot for "nasty neighbor" is still open.

After that, things went further downhill fast. I ended up threatening Persistence (at the church) that if her monkey business didn't cease, no egg hunt for her. Sadly, I had to follow through on that threat. So she and I waited in the car while everyone else had the second fastest egg hunt ever.

Even more unfortunately, this entire scene played out in front of a lady pregnant with her first and due any time now. She watched with teeny bit of concern, I thought. I apologized, and she was nice, but I bet you she was thinking, "Oh CRAP, what have I DONE?!?!?!" I'm happy to always be able to provide the impetus for that "oh crap" moment with pregnant women.

But things leveled out later so we had some fun, too. And anyway, I already had the photos! 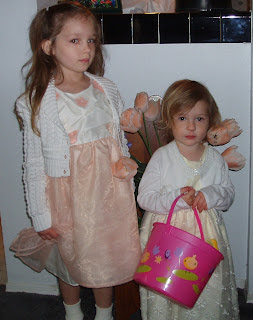 Note the look of suspicion mixed with scorn that I received from Patience when I suggested that they pose and smile while Nana was photographing them. Persistence might be cool with the whole photo deal, except, of course, Big Sister gets to set the tone. 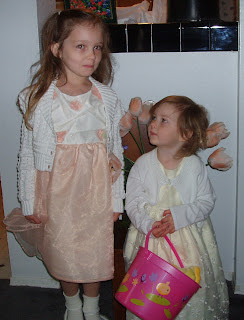 Note the tremendous fight to keep from smiling. Her father and I were acting like monkeys in a tickle fight, complete with noises. You are REALLY motivated to not laugh if you can resist the sight that had to be!

thailandchani said…
Thanks for the photos. :) I will be glad to see the photos of you as well ~ but this was good! They are lovely children! :)

Unknown said…
They do look be-yoot-ee-full! Poor little Marley had strep throat and didn't get to wear her Easter ensemble. :( She's all better now though and terrorizing me as I type!
April 13, 2007 at 4:05 PM

Kyla said…
The girls are SO cute!! I have family elsewhere in the state and they had snow on Easter! Not a flake of it all winter, but quite a bit on Easter...it just doesn't seem right!
April 13, 2007 at 4:43 PM

boogiemum said…
Congrats on the 35 pounds, that is something to be proud of! So are your beautiful girls with some much personality. Thanks for the pics!
April 13, 2007 at 5:42 PM

Girlplustwo said…
they are so delicious i could lick their cheeks (but i won't, i am not that freaky, so relax)

Anonymous said…
Beautiful children, and kudos on the big 35! You've lost the equivalent of a healthy preschooler!
April 13, 2007 at 11:44 PM

S said…
I'm so impressed by the weight loss -- congratulations! Now you must share your secret with me, cuz that's just about exactly the amount of weight I need to lose.

Unknown said…
Congratulations on the lost pounds! That is awesome!

The pictures are wonderful and your daughters are truely beautiful! They look so adorable in their Easter outfits, like two perfect dolls!
April 14, 2007 at 3:53 PM

K said…
Oh, they are so beautiful! Love the one of Patience trying not to smile.

We got home the night before Easter at 1am and then were up until 4am after the oldest had asthma flair up. We didn't make it to church.

You are so smart to bring extra clothes.

But if any of the fashion show photos look anywhere close to halfway decent I might be persuaded to post one of those.