Where's your comfort zone? Great, now jump out of it for the Hump Day Hmm! 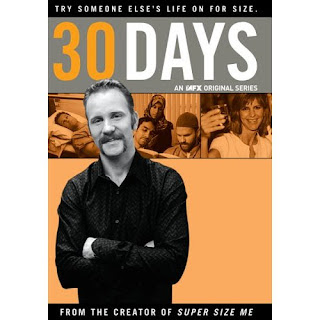 My comfort zone is a continually evolving thing. I believe it is largely dependent upon experience and education, which proves the cliche that there is no substitute for time. I believe you have to use that time wisely, of course, to grow and develop. One way to do that is to stretch and reach outside your comfort zone.

I recently ran across a reality show called 30 Days, which asks people to spend 30 days outside their comfort zone. It's not just some social issue version of wife swap, though. It's an honest attempt---as much as is possible all things and media considered---to shine a light on what can grow when we walk in another's shoes.

In fact, FX, the network that produces and runs the show, uses the motto, "There is no box."

30 Days is the brainchild of Morgan Spurlock, best known for his controversial independent documentary Super Size Me and his book, Don't Eat This Book: Fast Food and the Supersizing of America. The show is considered a smart and intriguing documentary that breaks into preconceived notions and tackles social issues, such as anti-aging, Muslims and America, homosexuality, drugs and alcohol (and parenting), immigration, religion and atheism, abortion, and more.

This show got me thinking.

Growing up for me seemed to include being pulled out of my box over and over. Born into a typical American nuclear family, I developed a standard middle class girl box. After my parents divorced, that box was busted. Although my mother had a college education (which was still fairly rare back then) and job experience as a teacher, and was able to get a decent teaching job, we lived penny to penny. Teaching still isn't the most highly-paid profession, and back then it was even less. As a "woman's" job, it wasn't considered necessary to make it high-paying, especially since society still considered women "under men's protection and support." Additionally, there wasn't as much opportunity for her then since teaching was one of the main professions open to women, who were seeking jobs as divorces increased. We lived in "poorer" neighborhood, with many other divorced mother-headed families and new immigrants.

Unlike most suburban kids, by age 10 I not only knew that sometimes two families of 12 people lived in a two-room apartment, I saw it first-hand. I learned that these kids considered themselves fortunate because they knew it could be much, much worse. I discovered that these kids thought they were lucky, and were appreciative that they got to go to school instead of work.

That made me start thinking.

That got me out of my box.

Once you've been out of your box and had your eyes and mind opened, there's no going back. What an amazing thing, really.

How much better we can appreciate, understand, accept and feel for one another when we know what and why of another situation.

These days, as an adult, a mom, a suburban dweller, it's an active choice to find Other, to see and consider how things are outside my box.

Blogs are one of the greatest ways to do that. It's the ultimate in human drama, isn't it? Aren't some of the greatest tales motivated by circumstances or choices that pull characters out of their comfort zone? (For example...About a Boy by Nick Hornby and any of Richard Russo's books, as well as Mary Doria Russell and Ann Patchett's books. Just to name a few of my modern favorites.)

So what better topic for Hump Day this week, eh?

I think reading each of these stories will pull each of us beyond our own existing horizon, so I really hope for a lot of participation. Let's even beat last week, which had over a dozen submissions! (I was ecstatic!)

To motivate you even more, I'll put a prize on the table again: a Morgan Spurlock book or DVD. Choose among his Super Size Me, Don't Eat This Book, or Season 1 of 30 Days.

Jennifer S said…
I hadn't heard of that show, either, but it sounds interesting.

flutter said…
We've been watching this on TiVo and I really admire the concept. The use of thought and finding it over emotion...or maybe a mix of the two
June 1, 2008 at 5:55 PM

Kat said…
I've looking forward to this 30 Days show but I thought it hadn't started to air yet. I'll have to check again. It is such a great concept.
This is a really great topic and quite a writing challenge. We'll see if I'm up to it. ;)

Woman in a Window said…
Oh, if we could just blow up those boxes! I see it time and time again, people at ease, too comfortable in their boxes. It's frightening, too, to see me stepping into boxes I don't want to enter, but it happens sometimes. But to get out...oh, to get out...
June 2, 2008 at 7:44 PM

carrie said…
I loved the first few episodes I'd seen of that show. And it's true - we learn so much about ourselves, and in turn each other, when we walk in a pair of uncomfortable shoes.
June 2, 2008 at 7:53 PM

Unknown said…
My son watched Supersize Me at school and will never see the golden arches again without wanting to vomit. This show sounds very intriguing. I'm not really blogging anymore, but I'd like to participate in this Hump Day, if that's cool.
June 3, 2008 at 8:43 AM

Julie Pippert said…
Kim, of course it's cool. If you want, you can email it to me and I'll post it here or you can use your space and add your link in, whatever works best for you.

Le, what a great point. Ditto to woman.

To those who have seen the show I can't believe I didn't know about it until after the first two seasons! At least I am in good company with some of the others of you. :)
June 3, 2008 at 9:52 AM