September 14, 2008
Soon, I will have a story with words. But for now...a few photos and links to what we knew a of yesterday when we went back to our neighborhod to check on the house.

The area is getting hit with more rain and has flash flood warnings now, and news is of course making it sound really dire but I'm hoping it's just a case of newsodrama.

In short, it's a good news/bad news situation. Bottom line: we fared okay and have not suffered any major losses personally.

I'll leave it at that because you're probably going to get to hear plenty of whining from me about the financial hit this is going to be.

Here are the photos:

Trying to get back to our town: 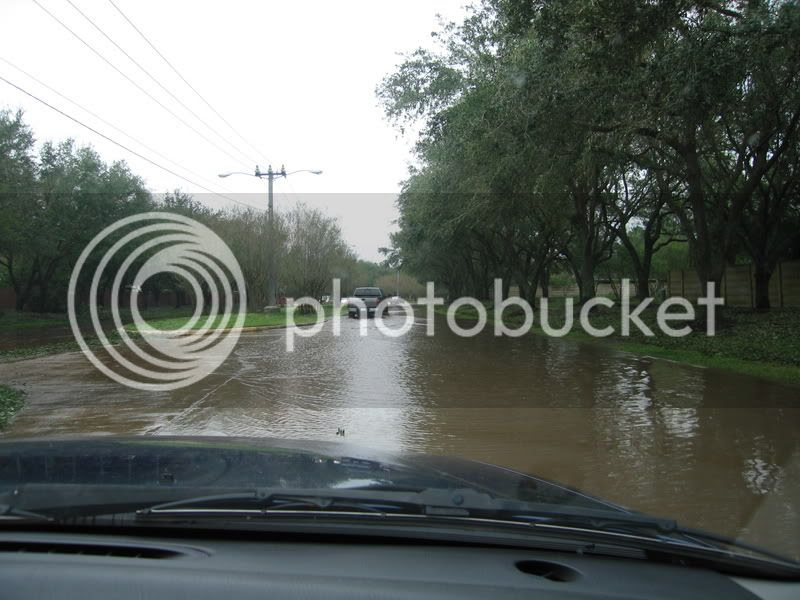 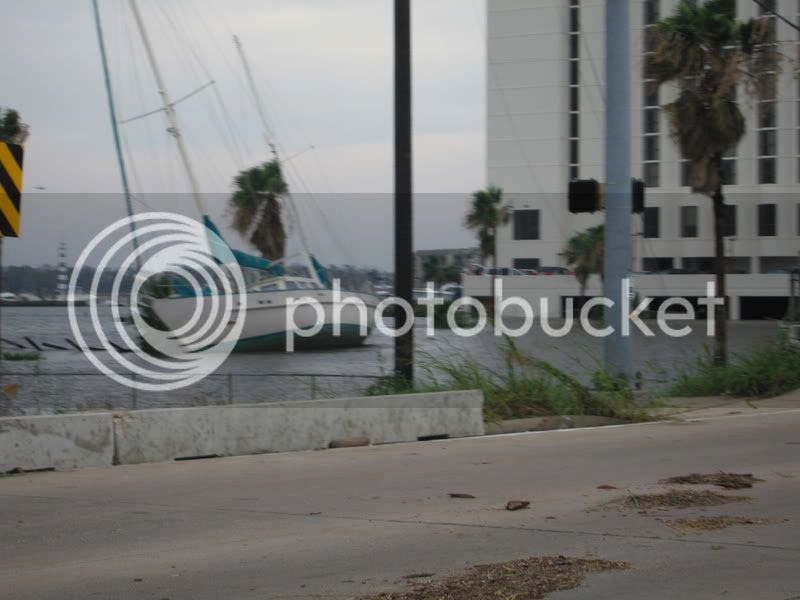 This used to be a really nice park across from our neighborhood. Park and large parking lot covered. Water up to the roofs of the pavilions. 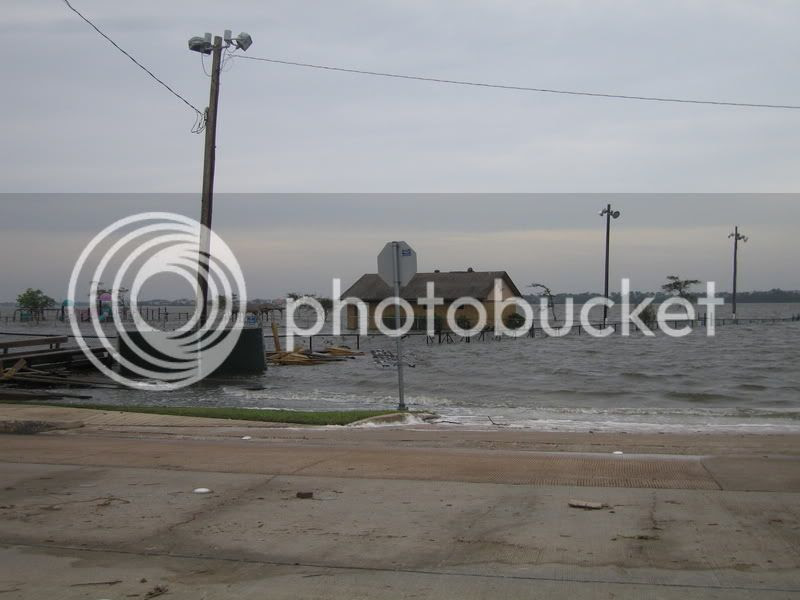 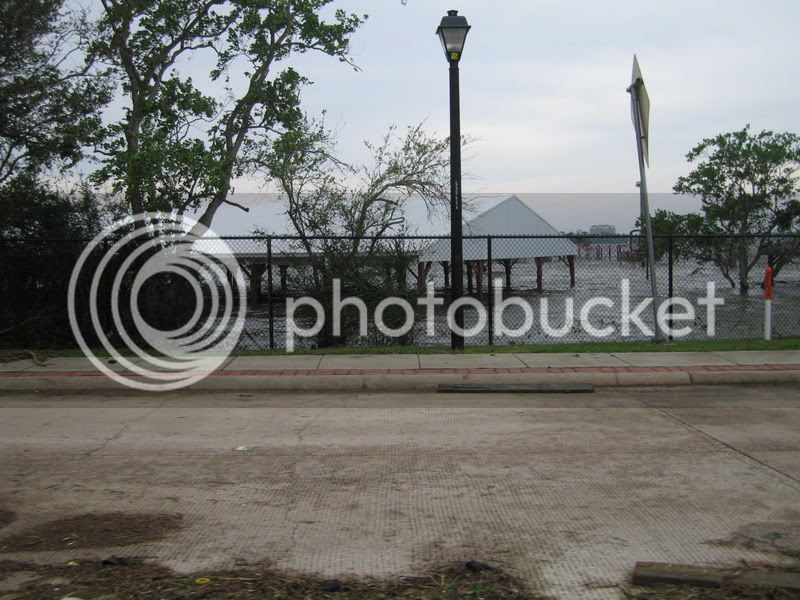 Water receded off the road, thankfully: 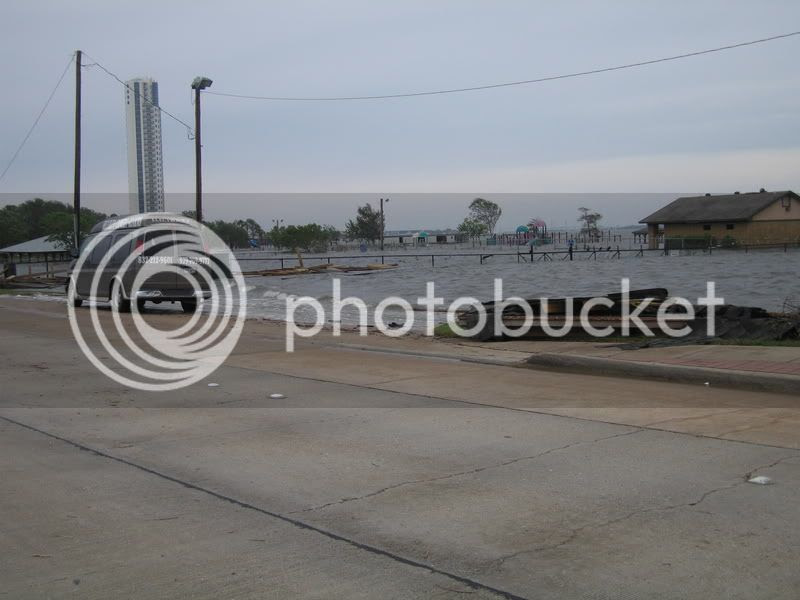 In our neighborhood---and YES this is the very neighborhood the CNN reporter drove through and filmed and that was featured on CNN's post-Ike coverage. Our neighborhood was as far as we could go yesterday, because right past us they had road blocks. While we were there, the sheriffs arrived and started kicking out gawkers, filmers, gougers, and potential looters. Everyone there had to show ID to prove residence or leave. 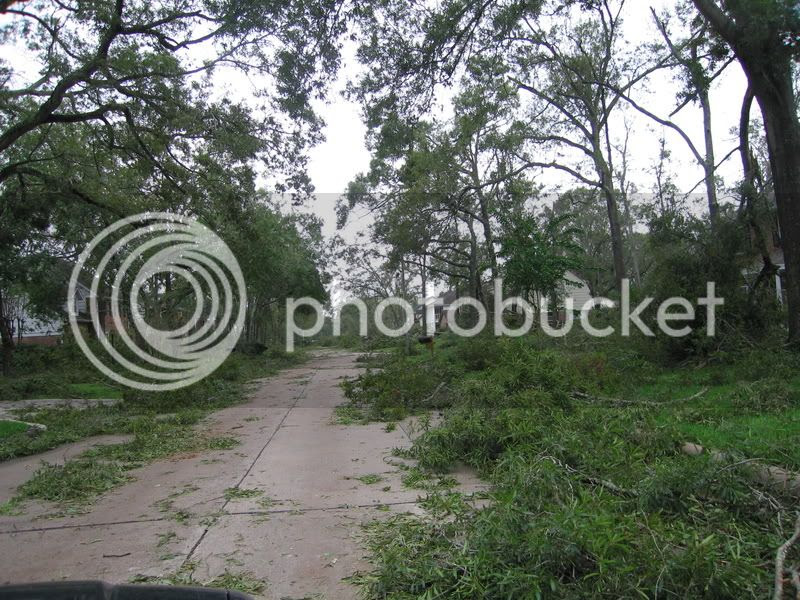 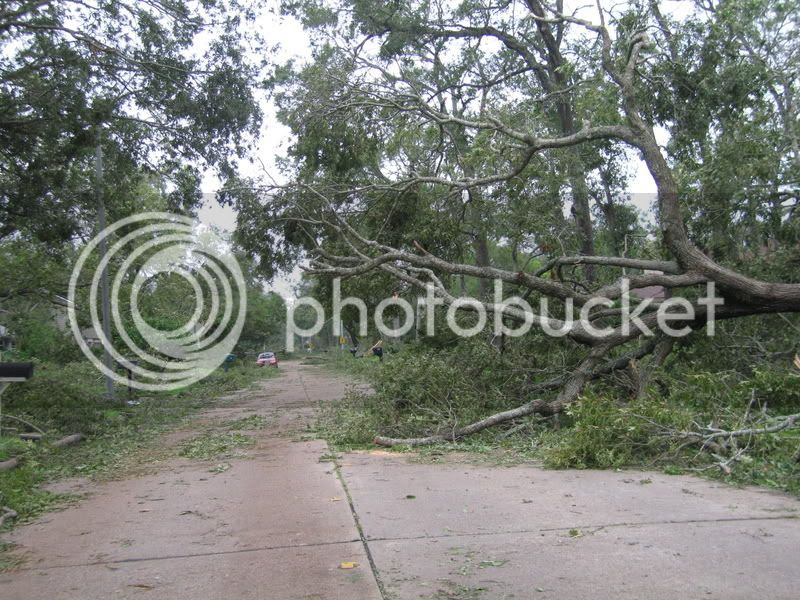 The end of our street and what used to be a street, park and playground in our neighborhood (at the end of our street). The hut (out in the middle of the water) is usually on land. It's our scout hut and it's probably on about 12 ft stilts. I think our Daisy Scout meetings are going to be postponed... 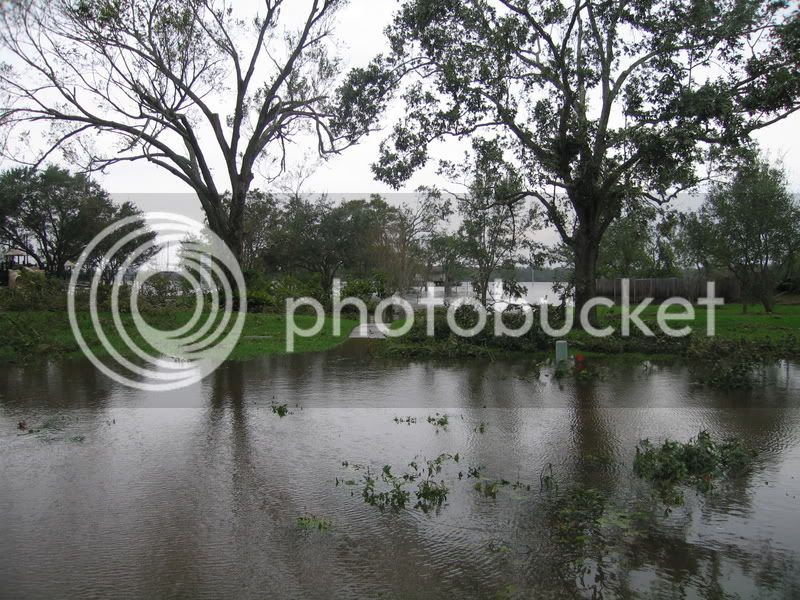 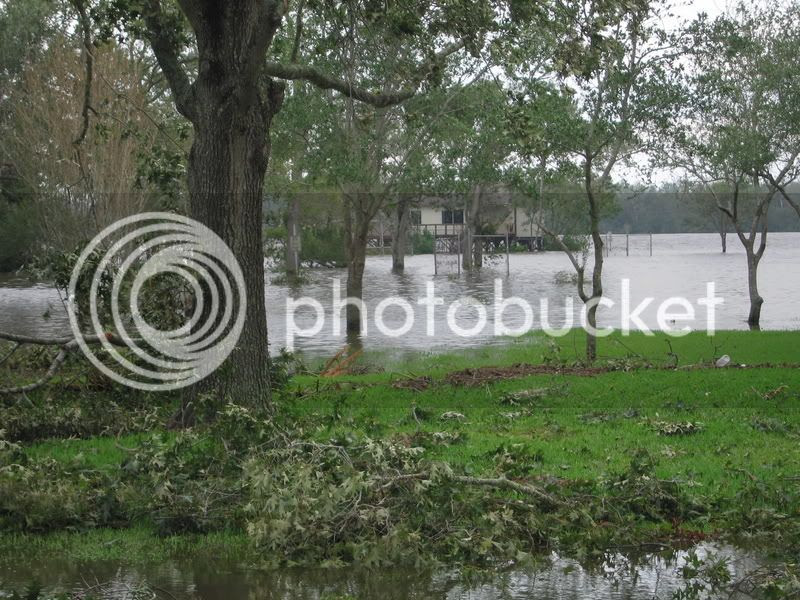 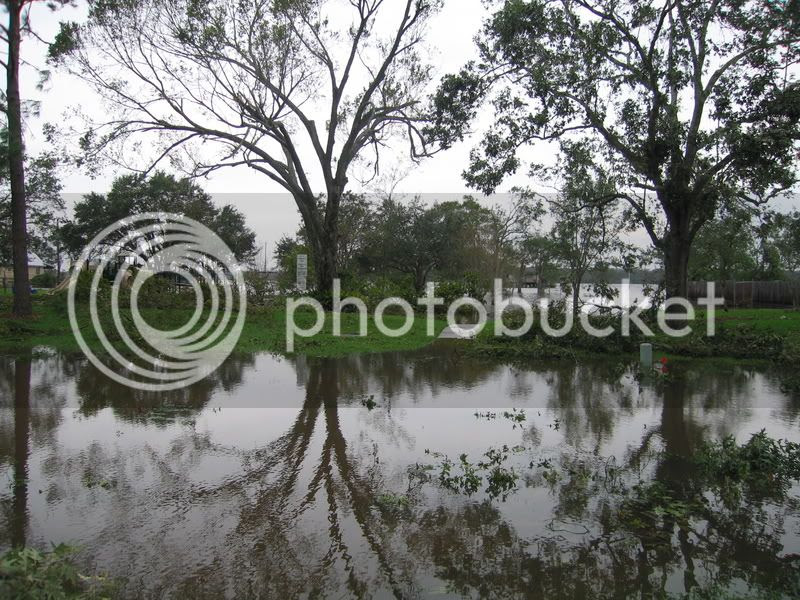 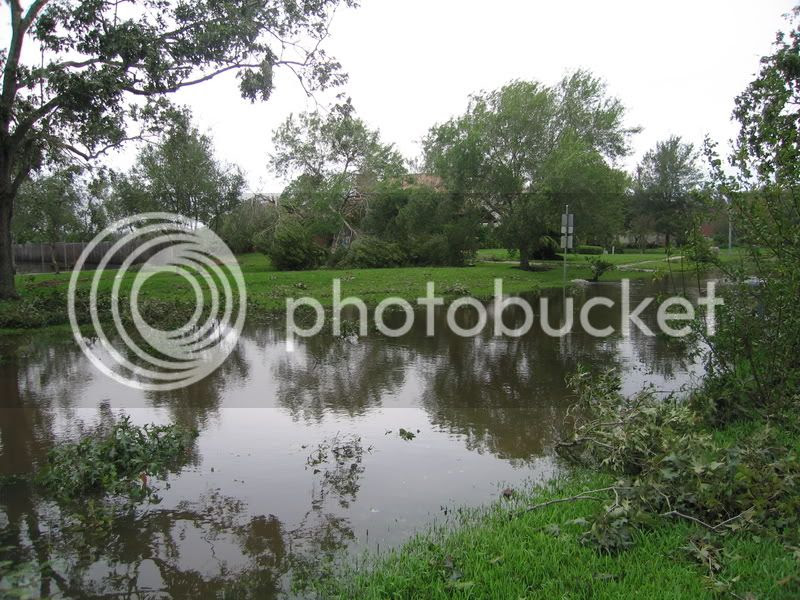 Our backyard before and after: 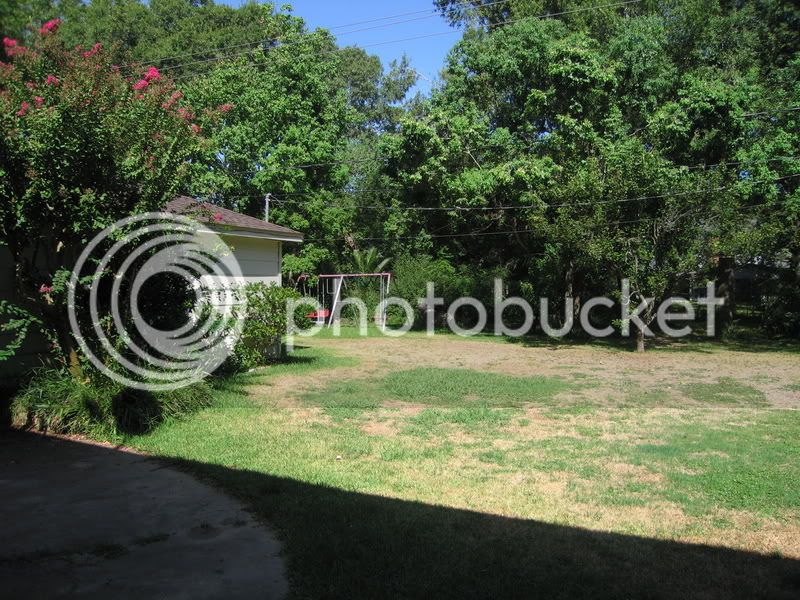 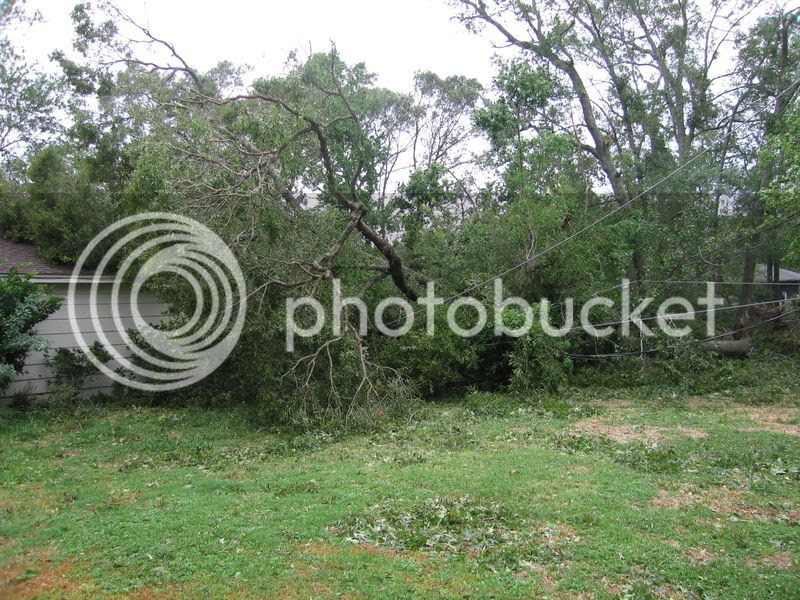 preTzel said…
You've been in my thoughts Julie and I'm so glad that you and your family are safe. I'm sorry you got hit so hard and I hope things can get back to normal, whatever that may be, as soon as possible. (((hugs)))
September 14, 2008 at 1:06 PM

Unknown said…
oh Julie glad things are okay as they are, but still so sorry. This is going to be a hit. My mind tracks just that way. Still thinking of you guys.
September 14, 2008 at 1:15 PM

the dragonfly said…
Oh wow...I'm glad you and your family are okay...

Lori at Spinning Yellow said…
Well, those photos sure are sobering. I'm glad you "fared okay" but feel for you and all the assessing & clean-up (not to mention $) that comes next.
September 14, 2008 at 2:57 PM

~TigereyeSal~ said…
I'm sorry for the losses and mess, Julie, and I wish you strength and patience as you clean up and rebuild.

Anonymous said…
Whine away when the urge strikes. It is better than being stoic or saintly - which you actually don't get any real credit for anyway.

Queen of the Mayhem said…
Here's hoping it doesn't cost as much as you think it will to fix everything!

We had a little flooding in our basement due the remnants of Ike, but seriously as I was cleaning I thought of you and others in TX who will be facing much longer cleaning up time.

SciFi Dad said…
OK, so the yard looks pretty rough, but unless I missed something, you didn't mention how the house and its contents fared?

Anonymous said…
Every reference to your area had me sitting up straight. Wondering and hoping that the damage to your neighborhood was a minimal as could be. Here's hoping the lights come on soon.
September 14, 2008 at 6:44 PM

Melissa said…
Wow! But it looks like you didn't take on any water, so that's huge. I just showed these to my dad (who is still here) and he's really encouraged as to what he's going to find when he goes home tomorrow.

Anonymous said…
Oh, no, not another tree.

So glad that (it looks like) your house is not flood damaged.

MommyTime said…
Oh, Julie, I'm so glad you and your family are safe. I've been worrying about you this weekend. I know this is overwhelming, but I hope that it is not devastating. It looks like you may not have lost all, for which I am thankful. And I wish you all the best for speedy reclamation. Thinking of you.
September 14, 2008 at 8:24 PM

kirida said…
Thank you for updating us, Julie. I hope your house was not damaged and that you and your family stay safe.
September 14, 2008 at 8:48 PM

crazymumma said…
I was you tubing the storm constantly and it was so ferocious. i am so happy you are all okay.
September 14, 2008 at 9:57 PM

Unknown said…
From the outside, it is hard to tell what got inside... I know you'll update us when you can.

I'm glad that--in relative terms--you did okay. I hope that the aftermath of costs and paperwork and headache is not as bad as anticipated.

It seems like this happened all too recently to be happening again.

But remember those stalks of corn that grew in your yard? Hopefully, after the long road ahead, there will be another moment to wonder at it all from a place of complete safety and back-to-normalness.

You are amazing people, Julie. I know you don't want to have to be, but your are anyway. Many hugs and many chainsaws to start clearing trees.
September 15, 2008 at 12:18 AM

jeanie said…
Oh my - no frivolous comments from me today because those downed trees brook no frivolity.

Anonymous said…
Julie, I am so glad you and your family are OK! I am so sorry for all your troubles and the damage to your neighborhood and property. Thinking of you and wishing you the best as you put your life back together again!
September 15, 2008 at 8:51 AM

Robert said…
Help will be on the way soon. I know I worked with men from Beaumont, TX, after Katrina, and others from Houston. There will certainly be a big response to that area in the coming weeks.

Robert said…
Help will be on the way soon. I know I worked with men from Beaumont, TX, after Katrina, and others from Houston. There will certainly be a big response to that area in the coming weeks.

Anonymous said…
Thanks for putting the pictures up. I'm getting my camera hooked online as well to put some more up. It was a tragic affair. I am glad it ended well for you.
September 15, 2008 at 11:45 AM