River raft beds and other reflections (of life after a catastophe) 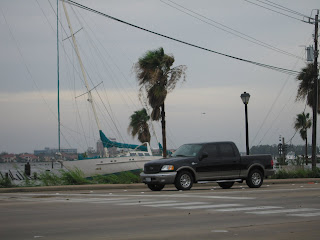 One day, it seemed that the crisis was over, the disaster passed, even if the situation wasn't completely at an end. Blue tented roofs covered well-lighted houses that received phone calls once again, and where the people within made breakfast, squabbled about what to do for dinner, ran showers a little too long, and folded laundry while watching reality TV. The traffic lights no longer dangled into the streets, bigger than you imagine up close, and just one more obstacle to drive around. And though they still flashed, instead of running the red, yellow, green cycle we expect, flashing made everyone stop, instead of allowing some to pretend it meant a free for all where you never have to halt. The big government trailers and trucks still hogged the roads and parking lots, but there were fewer of them. As the public sector moved out, the private sector moved in.

The big sailboat still leaned against the palm tree next to the hotel. I wondered if the owner had to drive by and see it there, on the edge of land and water, not quite enough a part of either to be rescued easily. I wondered what it must be to see the grand boat, leaning, stranded---the boat the family had taken out, maybe at the fourth of July to watch fireworks, or maybe at Christmas, to chase the Santa flotilla. The children probably complained about having to scrub decks or hold lines, but inside you knew they were thrilled to have a sailboat upon which they could skim across the water, head out to sea, feel the wet wind in their face, and smell the salt. What would it be to drive past her, the grand old sailboat, happy family memories peeling off her sides like the paint. Was the loss of the boat the family's biggest lost, or the least of it?

The traffic lines were long, still, behind the flashing lights on this major road, a highway, really, and I had plenty of time to stare at the water, and the boat, awkward and out of place. It was then that I noticed the interlopers, big salvage barges and their enabling tug boats. The barges lay heavy and flat across the smooth surface of the water, the tug boats comically short and squat next to them. Huge cranes rose in intricate lines above the rusty deck, somehow clean and graceful, a feminine counterpart to the masculine barge. They seemed too fragile for their work, which was lifting sunken ships from the bottom of the lake.

Later, when I drove by from the other direction, the barge was littered with dripping sailboats of varying sizes. The expiration date for owners to claim and rescue their boats had passed, and the salvage companies came in, waterbound vultures, picking remains. Still later, trucks with trailers hovered in the park parking lot, by the dock where the barges rested, crane rope limp as if in weariness. Men in long shorts and ball caps walked the deck, inspecting ships, all of which leaned to one side or the other, bowed bottoms not a fit for dry land. An auction, I thought. They are buying the broken pieces people had to leave behind.

At home, I sorted through one of the many piles of papers and mail that have collected since the hurricane. There are many stacks and piles, very deep, offers, bills, demands, notices, and more---the little things that add up if you don't see to them daily. One stack was from the schools my daughters attend. Somehow I had not understood when I first enrolled my children in school that I was also enrolling myself. I expected to help them learn, push them to complete homework, meet with the teacher, all of that. I just hadn't realized what a full-time job it could be, fundraisers, volunteering, reading forms and notes and letters. I sat down and started in on the school pile. It seemed important to get a handle on what we had missed or were about to miss, for school.

Like the mail, a good half of it is the paper equivalent of spam. I sorted that into the toss pile. Much of it involved dates or events already past. Toss pile. Quite a bit of it was hurricane related.

"Dear Parents, I believe that our school is more than a school, it is a community," wrote this year's PTA president in a memo, "As we begin to put our lives back together following the devastation left by Ike, the PTA wants to know how we can help. We would like to organize a list of the families that need support and a list of those who are able to assist. Whether it is a load of laundry, a bag of ice, a pot luck dinner, or some other need please let us know."

After that kind introduction, the memo turned into a form---you had two choices: NEED HELP or CAN HELP.

Everything gets sorted at some point.

I reflected on the memo. I know the people of my community. I've seen their strength and ability to carry on. I've read notes from people who lost everything, their homes and everything in it, and still they offer to help as they can.

I imagined this kind and caring PTA president receiving back forms from families, which she sorted into NEED and CAN piles, the CAN pile towering over the NEED pile.

The biggest contributions I've received when I asked for them were largely from Houston area locals.

I emailed the PTA President and said I had some gift cards, from a kind family who wanted to help. We agreed to a meeting time and place, and I brought the cards to her.

"This is really nice," she said.

"I have to run, school pickup for my younger," I said.

As I walked away, I realized that neither of us asked the other how our homes and families fared during and after Ike.

More than the retreat of the trucks, the cleared debris, or the repaired traffic lights, that signaled to me that the crisis was over. We're past what happened and moving on to what we're doing to recover from it.

Note: The title of this post is from Nanci Kincaid's book of short stories, Pretending the Bed Is a Raft, which was made into an absolutely brilliant movie by Isabelle Coixet and Pedro Almodovar (one of my favorite filmmakers), titled My Life Without Me and that starred Sarah Polley and Mark Ruffalo, two of my favorite actors. It's a brilliant film. Brilliant. It catches the pace, emotion and relationships of people movingly. Watch with big box of soft tissues.

Jennifer S said…
Julie, it would be right for some other outlet to pick up this post and feature it. Beautiful writing that tore at my heart. Your images are so clear and haunting.

Melissa said…
I'm glad to see things are slowly getting back to normal around there. And jennifer is right...we all need to hear more about the after. Thanks for sharing.
October 9, 2008 at 3:27 PM

painted maypole said…
i'm gad to hear that the stories of help are growing, and that you're starting to get back into some sort of (new) "normal"
October 13, 2008 at 12:24 PM

Wayfarer Scientista said…
It's funny how it works like that - the busiest people are the most likely to offer their time, those with the least the most likely to try and help out. I'm glad you and your family made it through okay.
October 13, 2008 at 1:27 PM

Christine said…
sorry it has taken me so long to get here...

julie--there are good, good people out there, and you are one of them.

Mimi Lenox said…
This week we are memeing the movement to get it rolling along. You've been tagged by the Queen of Memes!
The Peace Meme
October 20, 2008 at 12:20 PM

Unknown said…
great post. I love the NEED HELP, CAN HELP memo. Sounds like the perfect mantra for everyday life.
October 21, 2008 at 9:04 AM

MommyTime said…
This is, as usual, lovely and lyrical. But it also strikes such a cord. I find it so common that the people who are closest to the brink of difficulty themselves are often the most generous about helping others step back from that brink. Human nature is a curious thing.
November 6, 2008 at 9:09 AM

Just checking in. Thought you might have "Woot!" posted or something after election day.

Hope all is well!