Today, you can listen to me on FOX News Radio and Blog Talk Radio 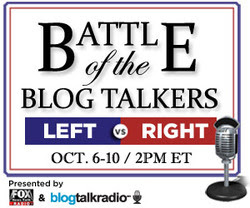 Today I'm going on FOX News Radio to talk, chat and take questions from listeners about a specific subject. I can't tell you what I'll be talking about (although I know!) but I can assure you it's a Big Topic On All Our Minds.

Initially I was hesitant to do this---all progressives know to be leery of FOX, and watching Hannity's Radicalism in America (aka How To Fan the Racism and Xenophobia Flames Against Obama) show last night, followed by an exploration of the economic crisis (squarely blamed on Democrats, because we all know problems and solutions are always single partisan) didn't assuage my fears that much. If FOX has a commitment to fair and balanced reporting, you can call me a monkey's mother.

I expressed these concerns to the executives at FOX and Blog Talk Radio. Apparently, I wasn't the only concerned progressive (there are four of us).

We were assured that this is a legitimate, Crossfire-like debate, not an ambush or setup.

And to their credit, I believe them. I think it's a great idea, and I am glad they are committed to providing a straightforward competition that furthers the discussion about key issues in our nation today.

I also don't think there's a problem with partisan reporting. I do it every day at MOMocrats.

Of course, I do think it's essential that you be transparent, open, and honest about where your beliefs fall.

Whatever else you can say about FOX News, on FOX News Radio the talk show hosts are pretty clear about where they stand.

Many of us are more in the middle, in fact, if Bell Curves are to be believed, most of us are in the middle. I count myself right there too. When I talk current events with people around me---and you can believe where I am the majority vote red---I find our concerns and values are fairly similar, the big difference is in how we think we need to pursue the doing of things, and which party we think best addresses that.

I know many people haven't got the time to parse the immense amount of data and information that comes along about every current event, and many of us rely on news to triage this for us, and tell us the salient points.

From news we get facts, from other media sources such as talk shows we get opinion, and an out loud parsing of the information.

You all know I am a big fan of the critical thinking process. I think through constructive discussion and debate, we can think critically through information and arrive at intelligent, well-formed opinions.

This is why I am a huge supporter of bi- and miltipartisan politics.

So today, hopefully I contribute a little something a little positively towards this multipartisan and critical thinking process.

Come listen if you have the time, and please do cast a vote for me to keep me going through the process.

Here's the scoop as written by a fellow MOMocrat:

On Monday, October 6, MOMocrat Julie Pippert will be squaring off against fellow progressive Lynne Lupien of Left in Lowell in a unique opportunity to become America's Best Blog Talker. Help a MOMocrat out by listening in and voting for Julie!

Julie was selected by FOX News Radio as one of eight of BlogTalkRadio's most passionate and incisive hosts to voice their opinions about Election 2008 in the mainstream.

Beginning Monday, Oct. 6 at 2 p.m. ET, four hosts from Blog Talk Radio's Heading Left Channel and four from Heading Right will square off during a week-long, one-on-one tournament that will determine the best blog talker from each side of the political spectrum. Election 2008: Battle of the Blog Talkers unfolds on FOX Across America, hosted by Spencer Hughes and carried on FOXNewsRadio.com and Sirius XM Radio.

In Round 1, Spencer will moderate a debate between Julie and Lynn, who will each have five minutes of uninterrupted time to respond to the same topic. Listeners then vote (via mobile-text message and online poll) for their favorite blog talker, who in turn moves onto Round 3. Meanwhile, two Heading Right hosts square off in Round 2, with the most popular moving onto Round 4. And in Round 5, the Heading Left and Heading Right victors go head to head. It's like the "American Idol" of talk radio!

You can listen in live at Fox News Radio or at Blog Talk Radio. Just be sure to listen and vote for Julie!

Online and mobile voting will open at 3pm Eastern on Monday, Oct. 6th. Go to Fox News Radio for instructions on how to vote.

Anonymous said…
Good luck! It looks like a great opportunity and remember that we're all rooting for you.
October 6, 2008 at 10:22 AM

thailandchani said…
I'll see if I can pull it in on the web. That should be interesting.. although I wish we knew what you will be discussing.

thailandchani said…
I just got done listening to both of your presentations and yours was wonderful! Very good! You could easily have your own talk show.

Queen of the Mayhem said…
I am SO proud of you! I almost went CRAZY when I saw Punditmom on Fox.....so now I will have to go and vote for you!

Melissa said…
I can't believe I missed this! This is what I get for falling behind on my reader. :)

Jenny, the Bloggess said…
That is so freaking awesome!

Anonymous said…
I'll have to listen to the podcast - hopefully it will be on (or available via) iTunes shortly.

Also, didn't get a chance to vote - they had closed it down when I checked.

BTW, I am not sure you are really in the "middle" of the bell curve - probably more "somewhat left of middle". However, that is perfectly OK, as it would be *sooo* boring if we were all the same, now, wouldn't it?

Anonymous said…
Just finding this now (in case you thought I wasn't reading!)

Gwen said…
I couldn't get the extra install to work, so I missed your brilliance.

K said…
This is so awesome and you were great!

The trouble with Foxnews is that people who watch it exclusively seem to confuse opinion and fact. It's one thing to say I disagree with a candidate's economic plan or stance on Iraq, and quite another to call someone a terrorist. I also believe in honesty in reporting and not offering half truths that serve your needs.

When I read your pieces, I know the partisan bias, but you always support your opinion by real facts. That's called making a logical argument, which you do extremely well.

Green Fundraising Ideas said…
Interesting. You are a brave soul. No follow-up post on how it went?

I'd love to hear.