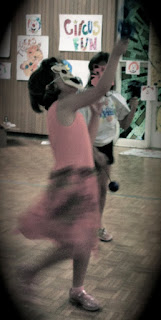 Anonymous said…
My childhood was pretty classic of the alcoholic home and I was fairly stereo-typical in my casebook reaction. It wasn't until I was grown and married with a child and a dying husband that I made peace with my father - who was the one who stepped up when I honestly didn't expect it.

I would never relive my childhood. There is nothing before age thirty in fact that I wouldn't go back and redo if I could. But I go home - remembering always that who I am is somewhat of its making but it is mostly my own efforts that have brought me to where I am and who I am. And who I am is pretty awesome.

Kat said…
Oh, Julie...wouldn't it be great if we all grew up with parents who cherished us the way we cherish our own kids? I survived my childhood, and the aftermath.

Julie Pippert said…
You are pretty awesome. And thanks.

In some way, I may always mourn not having what I needed (especially when I need it throughout life -- we area always someone's child and some part always sort of wants a parent -- KWIM?) -- you probably know what I mean. I know they do their best, but I also know, all protestations and entreaties aside, that it will not change, they will not change.

So true -- I think we re who we are in these cases despite the circumstances. Saying it is because of them gives too much credit where it does not belong. And is one more thing in a string of diminishment.

Yes, we have made ourselves. Circumstances gave opportunities, and we made choices.

Kami Huyse said…
Wow Julie, thanks for sharing this! Very brave of you my friend.

One thing that struck me is that you are building a very different future of security for your kids. That what happened to you does not have to repeat itself. That your real family is the tightest nuclear.

My childhood was also less than ideal, I would be happy to share sometime, maybe over that holiday cocktail, or "mocktail" as the case may be.

One of the ways that I have gotten over all of the bitterness and injury was to change my expectation - to not expect my parents to be any different from who and what they are. When I truly got to this point I was able to laugh about the slights. The little "gestures" that seem to say "you're not good enough" I now understand to mean "I wish you the best and I care enough to complain, give unwanted thoughts and advice, but I have no real way of expressing that because I am broken in that area."

Julie Pippert said…
Kat, cherish -- oh yes. Perfect word. Yes, i wish we all had the ability to feel cherished. In ourselves and from someone else. :)

Ed T. said…
Want to relive my childhood? No way, Jose. Been there, done that, threw away the t-shirts long ago. While I have some fond memories of those days, I (like many others I suspect) have memories that I have tried for decades (with varying degrees of success) to bury.

As to always wanting a parent, I do know what you mean (having lost my dad when I was in my early 20s, and my mom almost 5 yrs ago.) Without them, sometimes it seems very, very lonely. And, given that Dad passed just after Thanksgiving, and Mom not long after Christmas, the holidays don't always seem very festive to me, either.

All in all, though: while they were not without their faults, I feel in my heart they tried to do their best. I hope, when the day comes, that my own son says the same thing about me.

Julie Pippert said…
Kami, I think that recently I have changed my expectation -- what a great way to put it. I didn't feel hurt, per se, or angry -- just a little sad. I wish my dad wasn't so broken in that way -- also a great way to put it -- that he could celebrate with me. I think how much I enjoy that with my own kids, and it's too bad it's not that way for my dad and me. So I don't feel diminished. I don't add meaning to it in any way -- but I take it for what it is. I think all in all that's my new thing -- taking things for what they are.

Ed, i do think your sons will think that you did your best. I think kids do recognize when we try -- whether they are small or big. :) When my MIL lost her father (a few years after losing her mother) she looked at me and said, "I'm an orphan now." I felt so sad for her.
December 1, 2009 at 4:39 PM

Bon said…
we celebrated my father's birthday this weekend, and it was all rather...pleasant, which surprised me. i did not come home feeling smaller than when i arrived. i did not have to spend hours defending myself - afterwards, unburdened from my shell - from the slings and arrows of apparent disregard for my human worth. it was nice. and it gave me hope. which i have lived long enough to know is the most dangerous thing there is.

so i get it. and i was moved by this. i'm grateful, in this respect, that i had two families to negotiate growing up, because the helpless shrug, at least, i did not have to face. and my heart breaks for the little girl Julie who did...the adult Julie who still does.

i am also grateful for your standing up to speak your worth here, for setting that example. i can only say that i'm pretty sure your essay is amazing, if it's half as good as this post.
December 1, 2009 at 5:53 PM

Ed T. said…
"I'm an orphan now." That sums up the feeling pretty well, whether you are 9 or 49. It is a strange feeling to be sure.

MARY G said…
That must have been so hard to write, and so very very hard to live through.
You are one of the most courageous and sensitive people I have ever encountered, as I see you through your words, your artfully mounted jewels of words.
Well done.
December 1, 2009 at 7:35 PM

Kecia Greer said…
Ms. Pippert,
We love you. You share, or you don't, and it is up to you. You reveal or you sweep up the lies. Either way, even though it depends on you (especially because it does) we love you.
December 2, 2009 at 4:52 AM

Yolanda said…
Too much familiarity here for me to craft a coherent response. But I'm really glad you wrote this, and that I read it, today.
December 3, 2009 at 4:31 PM

Mayberry said…
oh, Julie, my heart just breaks for that poor brave little girl, who grew up to become such a wonderful mom in spite of the really unfair start she got.
December 4, 2009 at 10:33 PM

jeanie said…
Thank you for opening up so much, Julie.

I didn't have your childhood - I am the child of parents who did.

And from the second generation perspective, your children will have their moments, but as adults they will look at the childhoods of their peers and give great thanks that their parents got to enjoy the childhood that they gave.