RIP Ted Sorensen (If You Can) 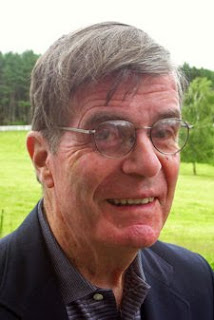 After a stroke today, incomparable JFK speechwriter Ted Sorensen died.
He was 82.
Sorensen might be the most quoted speechwriter. He is certainly the man behind JFK's best lines. Sorensen, though, always attributed the famous lines -- such as "Ask not what your country can do for you; ask what you can do for your country" -- to Kennedy.
In an interview with the BBC about a decade ago, Ted Sorensen tried to explain why he and John F Kennedy got along. I think, in fact, it was his way of trying to explain why he always said JFK came up with the best lines, rather than taking the credit.
It's something writers can understand, I think; in essence, to paraphrase, he said he channeled JFK when writing -- he knew him so well, knew what he'd want to say and simply formed the lines that he knew his friend would want.
As someone who has ghostwritten and extensively "developmental edited" books, I know what he means. As someone who has written lines for politicians to say, I never thought of those words as my own. In fact, one day, while cleaning out a file cabinet, I came across a folder with old typewritten copies of the brief radio addresses I had written for a candidate who ran for president. I read the words with a sort of shock -- it still did not seem as if I had written it. Perhaps that's why it remained in a file folder rather than in my portfolio. It hardly seemed my own work.
Of course, I'm no Sorensen.
Sorensen compared himself to Kennedy in that old BBC interview, or rather, he contrasted himself. Kennedy was privileged and Ivy League educated, while Sorensen was a middle class mid-westerner with a state school degree. All totally respectable, but we know cache.
That was all superficial, though, he explained, because they had in common what really mattered: core values and ethics, and at heart both valued public service highly.
It's that factor that made the speeches -- his speeches -- great. "Speeches are great when they reflect great decisions," Sorensen famously said.
What did Sorensen think of modern day speeches.
I know what I think.
I think modern speeches are not great.
I think that's why Barack Obama so captured American attention: his speeches were great. They were great because, in general, they reflected great ideas. The tricky wicket is, of course, the execution of those ideas. That hasn't been so great. It rarely is. But I almost think faith is even more important, and let's be honest: we're missing a lot of faith.
Faith that our leaders are great.
Losing Sorensen the day before Election Day feels a little portentous.
I don't think the time for great speeches is past; and I think anyone who makes great speeches into a negative is perversely mistaken. You know who I mean.
Speeches now focus more on what someone brings and how the other person is defective, less on great ideas. Speeches now are either attacking, defensive, or downright offensive.
Speeches now talk a lot about The People, but oddly enough, I rarely recognize any people in the actual speech. That means it's probably hyperbole, and definitely a personal agenda.
People have now come so far from great that they mistake demagoguery for emotionally compelling and thus great. That's tragic. To me, anyway, Sorensen took a different view -- he was more optimistic, I guess you could say.
Sorensen actually addressed that in his 2008 book, Counselor: A Life at the Edge of History (from the History News Network interview):

"...[the book] reflects his idealism and hope for the future. The book recounts Sorensen’s childhood nurtured by a progressive and idealistic family in Lincoln, Nebraska; his historic JFK years as a senatorial aide and then as special counsel to president with challenges such as the cold war, the civil rights struggle, and the space race; and his subsequent law career advising governments, multinational organizations, and corporations, and meeting with world leaders such as Nelson Mandela, Anwar Sadat, and Fidel Castro."

HNN's Robin Lindley interviewed Sorensen, and I think these two questions and answers explain it all, really (bolding mine):

RL: Both legendary Sen. Henry M. Jackson of Washington State and Sen. John F. Kennedy offered you jobs at about the same time in 1952. How did you decide to serve with Sen. Kennedy rather than Sen. Jackson, whose office later became a breeding ground for neoconservatives?
TS: At the time, I knew nothing of Jackson’s hawkish inclinations or even that he would later be known as “The Senator from Boeing.” Instead, I chose Kennedy because [he asked me] to work on a legislative program to revive the sagging New England economy where unemployment was high and new investment was low. Sen. Jackson said I had a good reputation as a lawyer and he needed somebody like that to get his name in the papers. He also said he liked my Scandinavian name because that would go over big back in Seattle. And I chose Kennedy without much difficulty.
RL: It must have been reassuring to find a job with a humane senator who read books and knew a lot about history.
TS: That’s Jack Kennedy. That’s exactly right. Despite all our surface differences—he was a millionaire’s son, a Roman Catholic, a war hero, a Harvard graduate—and I was at the opposite end of almost all of those. Nevertheless, we found that we wanted this to be a better country, we both believed in public service, we both were interested in public policy, and we both wanted to see a peaceful world.

(You might be interested in reading the rest of the interview -- it's a good one.)
Sorensen chose Kennedy because of his values: revive a sagging economy, make this a better country, believe in public service.
He didn't want to work for Jackson as a "good lawyer who could get his name in the papers."
As a result, Sorensen wrote great speeches (and that was the least of it). Because he had great ideas and worked with someone who had great ideas.
No demagoguery required.
Just a lot of heart.