A sense of place 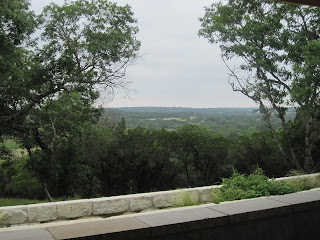 My mother lives in Bastrop. For years my family trekked to Bastrop for vacations and holidays. For years we walked along the Colorado River, either enjoying the Christmas displays or just the pretty scenery. For years we visited her little church and got to know the congregation, her friends. For years we hiked the woods behind her house, and bird watched in the pine trees in her front yard. For years we ate at local hotspots such as Maxine's and got dessert from the soda fountain at the drug store. For years we fell in love with this adorable and quaint little town, whose main downtown street was preserved through the Texas Main Street program, a program my husband learned about back in college and that we admired greatly.
For the last week, we've watched Bastrop burn:

BASTROP, Texas -- The massive wildfire is now 70 percent contained. Tuesday morning, firefighters cleared areas for more residents to return home.
Police removed the barricades at 10 a.m. for the neighborhoods of ColoVista South, Wilderness Ridge, Harmon Road, Cottletown Road, Bastrop State Park, Beuscher State Park and Park Road 1C South.
Inside many of those areas, the ground is burned completely. If feet don't crunch, they sink. The dirt across Bastrop is now like fine sand. Pine trees that once stood full and tall are now bare and charred.

34,000 acres, over $200 million in damages, over 1400 homes, 2 people…gone. One of those homes? My mother's house, the one where we built so many happy memories -- my daughter's second birthday, hurricane evacuations, cousins playing and doing punk hairdos with spray in hair color, our dog casing the yard for errant squirrels while waiting for a hike, Easter egg hunts with plenty of spots to hide eggs under pine needles, sitting on the deck reading, Mother's Day photos framed on my wall taken on the patio, a series of ranunculus photos that were among the first photos I ever sold, maneuvering backwards down her curvy long drive, the feeling of home and holiday we had each time we saw the big white mailbox at the end of her drive that signaled the end of our journey and time for family and fun.
She wasn't living there at the time. She'd leased her home to another family, so it was that couple who lost all their things, a lifetime of photos and music albums the first they named as lost. But we lost that house, that place.
Don't worry, people said, your mother has her other house and she can always rebuild, it's just things.
Oh no, it's not just things, it's a place. It's a place lost, a neighborhood lost, a community lost. Things, yes, they can be replaced, but a place cannot.
Odds are whatever is rebuilt next door will not be the green-trimmed log cabin where two elderly sisters lived, nor will it include their brave, exquisite little garden working to survive under such a canopy of pine trees that dripped daily spiky threats on the fragile flowers.
A canopy of trees now gone, land laid flat and bare for years and years now.
Quirky Tahitian Village, a strange Polynesian paradise themed neighborhood with homes of local stone and brick incongruously resting on streets named Mauna Kea Lane that wind and curve and rise and fall in the hilly country. Gone.
The Spanish hacienda, with full stucco wall around it, that sat arrogantly in a verdant lot surrounded by towering trees rather than dusky mountains and sand. Gone.
"Will they rebuild, do you think?" an older man at a local donation center asked me on Saturday.
Such a question. So many just assume. They think, with sympathy and good-intention, that the phoenix of this small, tight-knit community will rise from the ashes.
"I don't know," I said, truthfully. "My mother won't. A lot of her neighbors were elderly, a lot didn't have insurance. I just don't know. I imagine a lot of people will, if they can. I think a lot will decide this is it, a sign, or something, and they'll move somewhere else, maybe to a retirement home or nearer to kids."
He nodded, "I thought so. Yeah, I thought so. It's too bad, to lose their place."
I nodded too, my eyes stinging, a hot hole in my upper chest. He understood. I understood. It's gone. It will never be the same. The biggest loss of all is the place. 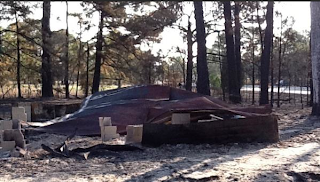 Please donate to American Red Cross, who has been such a help and savior for so many in Bastrop, and beyond. They helped in places of fire, flood, hurricane and storm. All at the same time. Thank you.

Jim said…
Moving, honest words. They create clear pictures of what that area used to be like, what it meant, and means, to all of you. Thanks for sharing those memories.
September 13, 2011 at 1:42 PM

Julie Pippert said…
Bob and Jim, thank you. Thanks for reading and caring.

WordyDoodles said…
It's the circle indeed. I'm so sorry you're facing this loss, and that your mom and family is. Thank you for sharing it so eloquently.
September 13, 2011 at 2:20 PM

Anonymous said…
This is one of the most personal and eloquent accounts I've read so far about the fires.

You are so right...this is not about 'stuff' being lost. It's about a community that has been carefully woven over decades being lost to time, never to return to the way it was again.
September 13, 2011 at 2:42 PM

Gini Dietrich said…
This breaks my heart...especially that photo. I'm so sorry that all of your memories have been burned to the ground. What an awful tragedy.
September 13, 2011 at 3:11 PM

Lucretia said…
I'm so sorry... it's not the memories we lose - it's the ability to make new ones in a place that already holds our heart that we lose. Houses do not make a community - the people and places do.

drm7.blogspot.com said…
Julie, you have expressed what must be in the heart of so many. We are in Austin, and feel deeply the loss. Praying for you all.
September 13, 2011 at 3:38 PM

Wendy Harman said…
Wow, Julie. I am continually impressed with your ability to convey complicated ideas/feelings into crisp, clear sentences. You did it with emergency social data and amazingly with this loss. My thoughts are with you and your family through this time and thank you from the bottom of my heart for all of your support of the Red Cross.
September 13, 2011 at 3:42 PM

Gloria Huang said…
Julie, I am so sorry to hear about this. Thanks for sharing your thoughts and feelings with us - it definitely gave me some much needed perspective. :) My thoughts are with you and your family!
September 13, 2011 at 3:43 PM

Unknown said…
So sorry to hear this, for you and your family and your mother and the whole community. It's been so hard to watch for the past week.
September 13, 2011 at 3:58 PM

Susi's Quarter said…
Wow been talking to friends in Austin and they kept saying this area was really bad. They had family here also. What a great writing of what one feels like with a fire loss. 35 years later and I still have trouble putting ours in prospective for my home as a youth. Yes, we rebuilt but it was never the same. Dad's dream was gone and so were the funds. Thanks for such a touchy of the heart and soul post.
September 14, 2011 at 2:50 PM