If I had to be stuck in a snow globe with a bunch of people...it would be these people and at SeaWorld

December 17, 2013
Disclosure statement: SeaWorld did not commission this post nor did they compensate me for it. However, I did receive free admission to the park.

If I am honest, I do not actually look that forward to December. Oh I try, but I am usually dragged under by endeavoring to make this the Most Wonderful Time of the Year. People can say simplify and say no, which is good advice, but even with a lot of simplification and no-ing, this is still a month that gets to feeling like a 300 pound ape on your chest by oh say December 16.

One thing I have grown to look forward to, though, this time of year, is our family's annual trek to SeaWorld San Antonio. It's cool, the park is decked out to the holiday nines, and there are loads of special events. Before that, though, I get to camp out in the park with some people I really, really like. And this is a story best told in pictures...of all the things we did...

We started with a Polar Plunge. I know, everyone says blah blah blah Polar Plunge in Texas ha ha. It was 28 degrees, people. That's cold, and in the water? Really, really cold! But my friends Kami, Stacy and Alba did it for Special Olympics! So did the SeaWorld Communications team, which includes our intrepid friends Brian, Mason, Jeff and Steve...who went as very cold Richard Simmons.

Afterwards we toured the super cool decorations, which are organized into theme areas. I particularly liked the Have Yourself a Very Texas Christmas, which included a boot tree! We went to see our buddies the seals (Yoga Seal, my personal favorite -- a Harbor Seal, for the record -- was doing Zen meditation.

Here's the ALL TRUE part though you won't believe it: then we went backstage and met the sea lions, who we went on stage with (somewhere, someone has a photo and someday I will have proof. I stood on the stage with a sea lion.). On our way to the stage, we got to see the otters who can make me laugh just by sitting there. I snapped one of the sweet mates and YES I sang Muskrat Love. (If you don't know that song...LMGTFY.) 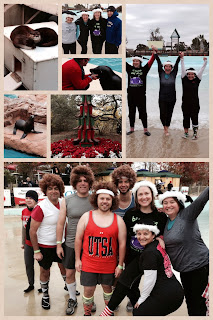 My favorite otters, the best posing seal, penguins (of course!) and a cactus wreath. 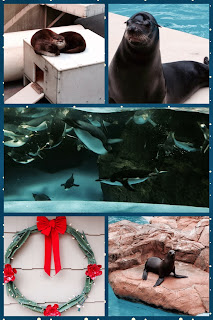 Next big adventure was Snow World. They took a huge space and made it a snowy winter wonderland, complete with sledding hill. In case you wondered, of course I slid down! 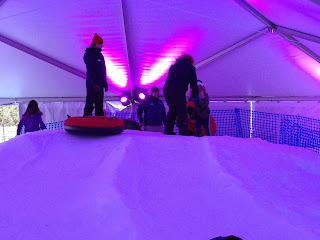 Right outside of Snow World was the most amazing snow globe that you could go inside. This is not photoshopped or a trick! We are really inside that snow globe. It's was hilarious and so fun, plus what a great photo. 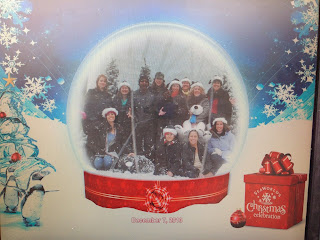 Then I took a selfie in the snowglobe and oh my gosh it did not suck! So I included it here! Look! A decent photo of me! 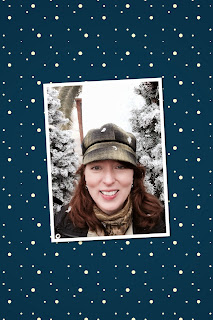 Yeah we stole up on another stage and took photos because...STAGE and LIGHTS and CANDY CANES! My buddies who are so fun! 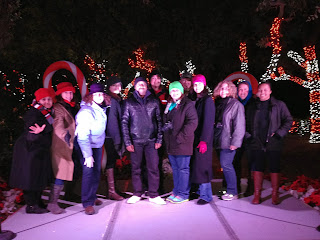 Dinner with Santa was a blast! The food was a lot of delicious favorites for the holiday season. Elves danced around, visiting each table. Santa and Mrs. Claus dropped in too, and Santa read The Night Before Christmas to the kids. It was all retro, total flashback to the 1960s, including all the decorations outside. I really do think we had that Santa when I was a little girl, in a smaller window sized form! 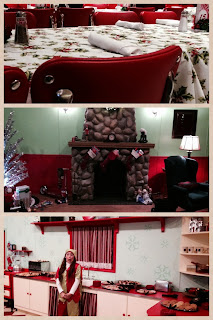 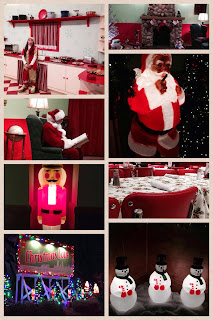 Last but not least, we got to see the newborn baby girl whale! It was magical, a miracle. Watching mother and new baby swim around, learning about their routine of swim and nurse. I snapped about a million photos and half a dozen movies but I'll spare you and only include a few. 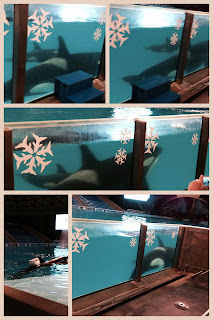 Finally, the campout in the dorms with the traditional pillow fight! At least this time, Mason had an ally in Fred. 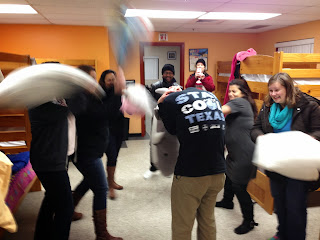 As usual, it was so much fun I had to promise to bring my family back during the holidays!

Colleen Pence said…
Our annual SeaWorld sleepover sure has become a tradition to which I look forward. Such great friends and fun, all in one!
December 18, 2013 at 9:12 PM

'Whatever' is not an actual salary and it really doesn't buy the groceries, either

May 27, 2008
Teaching my girls how to pull the rope for themselves. It was a pretty innocuous mother's club meeting, and we were talking about babysitters. I don't even recall why it came up, the talk about babysitters. Conversation unrolls so organically in these meetings, these times we get together, without children, and get to just talk. But sitters came up in conversation and the turn of that conversation surprised me. Greatly. Apparently around here it's bad manners to quote an hourly rate for one's babysitting services. "You know what gets me?" a mom said, "You know what sitters I prefer? Who I pay the most to? The ones who say 'oh just pay me whatever.'" She went on to explain that (and this is my paraphrase not her exact statement) to her, it came across as very forward, rude even, when these sitters said they charged X dollars per hour. My mind rolled that concept around for a minute: it's cheeky and rude to state upfront how much you
63 comments
Read more