A Great Love Story: The Young and the Chemical 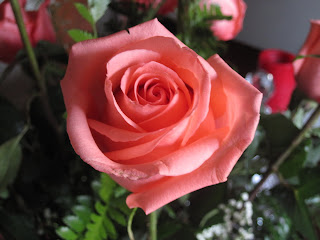 Driving home from school with my girls is what I think of Quality Catchup Time but they probably think of (or will soon) as Suffer the Mom Inquisition. The latter title comes from an inside family joke about Suffer the Mom Love, which is when I give hugs to children and pets because they want and need them even as they pretend they don't. Trust me, I can tell the difference and respect a sincere no but give a smiling "Oh Moooooooommmmm" a good squeeze.
While in the van, I ask each girl very specific questions so as to avoid potential monosyllabic responses.
My younger daughter has been trying out her storytelling skills and we've been working on the "that's a great story, what a neat imagination" distinction from "that really happened, how interesting."
Sometimes it's hard to tell. Such as in the telling of the story/report from the other day:
Daughter: Today I have a romantic tale! *giggles*
Me: A...romantic tale?
Daughter: Yes! *giggles*
Me: All righty then, let's hear it!
Daughter: At recess Jane* and Jim* had to sit on the bench!
Me: And that's romantic how? Because it's a boy and girl on the bench together? (Wondering if I need to define romance.) (Wondering where she picked up the word.) (Was it home? Valentine's Day? Elsewhere?)
Daughter: Moooooomm, no it's because they were kissing!
Me: They were kissing on the bench?
Daughter: NO! They were on the bench because they were kissing.
Me: Maybe you should start from the beginning. Set the scene, where were you, who was there, what were you all doing, and then what happened...
Daughter: We were playing family outside (names cast of characters and roles) and then Jane said to Jim that they could be the mommy and daddy because they were in love.
Me: Wow, really? She said that? They're in love? How long has this been going on?
Daughter: A long time! All week!
Me: That long! I wonder what the one week anniversary gift is!
Daughter: What? Mom, are you talking to the wall again? (This is what they say when I sotto voce.)
Me: No no just saying go on...
Daughter: And then Jane said they should go to a romantic spot and kiss. So they did.
Me: What? Wait, really? Jane said "go to a romantic spot" just like that?
Daughter: Yes she did!
Older daughter: Oh GAH your class is crazy. What is with all the kissing and romance?
Daughter: We aren't crazy, we're chemical.
Me: Chemistry, baby, you have good chemistry.
Older daughter: Whatever they have I hope it's not catching! What if the whole school went that crazy.
Me: I think you're safe, sweetie. So listen, Jane said go to a romantic spot and then what happened, no, wait, what is a romantic spot?
Older daughter: Mom, you don't know? It's a spot. That's romantic.
Me: Right, I get that, thanks. I meant, what, specifically, is a romantic spot there, like where did they go?
Daughter: To the pirate ship.
Me (impressed): Wow, the pirate ship, that's definitely got romantic potential, pretty good thinking on Jane's part. So what did Jim think.
Daughter: Jim thought it was a pretty good idea and he grabbed her hand and they ran.
Me (choking laughter)
Daughter: Then they thought it was private and romantic so she kissed him and he kissed her but the teacher saw and she said "I have said and said no kissing so to the bench Jane and Jim!"
Me: So that's the end of that I guess.
Daughter: No, they were happy to be on the bench because they were together. Even though they couldn't play. Or kiss.
And I was touched, really, that was sort of sweet. Also, really really awesome because not my kids!
* Names have been changed.

Me: Chemistry, baby, you have good chemistry."