In which Hollywood plays the best April Fool's Day joke ever: Hop 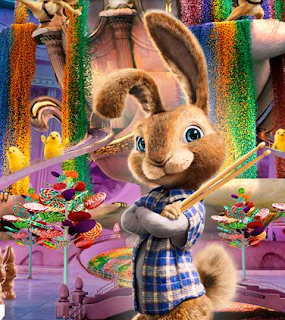 Yesterday, after an admirably long run of successfully avoiding April Fool's Day pranks, I got punk'd but good by Hollywood. I went to go see the new movie for kids: Hop.
Ha ha Hollywood, you really tricked me with your great cast lineup, all of whom had me totally fooled that they'd never do anything except creative and clever cinema. I was lulled into a false sense of security between that and the Toy Story series. That's the best con, you know: get to know your mark, build a sense of trust and then WHAMMO!
I fell for it! You got me with your con of "worthwhile artistic cinema."
Friday afternoon, I made one of those infamous "it seemed like a great idea at the time" decisions. I joined a group of friends and we took a gaggle (honestly, it was a gaggle -- I lost count at the sheer number; I know I brought four and it seems as if everyone else brought about that many too) of kids to see Hop.
If you have kids, you probably won't be able to avoid this movie. To which I say I am so, so sorry. I felt the compulsion last night to watch The Caller, in an effort to slipcover the empty calorie crap that was the "I Want Candy" scene in Hop. And that might have been the closest to comedic (my apologies to comedy) moment. That's two hours and about $40 I'll never be able to get back. I thought, as mothers like to think, that my children's enjoyment would be enough. Yeah, it wasn't.
My husband later asked, "How was it so bad?"
Me: I don't know, I mean, right? So much talent and creativity, such potential to build a new myth and this is what they come up with!
Him: No, I mean, what I meant was...what was wrong with it?
Me: The easier question to answer is what was right with it.
Him: Okay so...?
Me: The animation was impressive.
Him: And...?
Me: I don't think any real bunnies or chicks were harmed in the making of the movie. Although, they sort of owe the entire animal kingdom an apology, maybe a big donation to an animal rescue organization, sort of "damages for pain and suffering," and maybe also to some parents group, for the same thing, and also for defamation of character.
Him: That bad?
Me: Oh yeah. Thready and pathetic story line, unredeemable and unlikeable characters, and an unapologetic co-opting of the whole Santa myth for the Easter bunny, including the closing line, which was a shameful rip-off of Night Before Christmas. It was the Grey's Anatomy of kids' shows.
Him:
Me: ...and then? Set terrible expectations of Easter, candy, baskets, crap and so forth. Do you know what the six year old said to me? She asked why we have to send donations to Japan, can't Santa and the Easter Bunny just help them out! I feel like a salmon parent here, swimming upstream against a riptide!
Him: Do rivers have riptides?
And that right there pretty much sums it up: no, rivers do not have rip tides, oceans do, but sometimes the mouth of a river causes a rip tide. Looking that up was a way better use of time and far more interesting than Hop. I'm just glad I went with friends. Bonding experience.

annie said…
And this is why we don't have commercial tv anymore. My duaghter will never know about this awful movie and I will not have ot take her to it. Oh, one day a dvd copy will show up at the bookmobile and she will check it out - but again - I am safe.

Easter, though, has become this mini-Christmas devoid of most religious context. I don't mind overly b/c giving the girl little gifts is better than the heaps of sugar I got as child.

Donna said…
Into every mother's life, an occasional bad kids' movie must fall.

This too shall pass -- and in what seems a blink of an eye.