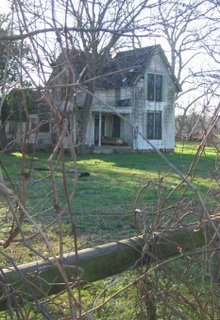 It strikes me that televised news has become, more than ever, an arena for false heroics and melodrama.

Article II, Section 2 of the United States Constitution provides that the President "shall from time to time give to the Congress Information of the State of the Union, and recommend to their Consideration such Measures as he shall judge necessary and expedient."

When this was written of course, there were no telephones, telegraphs, Internet, or the Almighty Television. News now is instantaneous. Nothing affects the state of this union without 2,342 news blips about it, continual and live, Podcast, broadcast and posted, over and over, every day until interest wanes or something like Lindsay Lohan breaks her foot in an defunct 80s rocker's shower.

These days, the President can't sneeze without everyone knowing about it (or the Republicans lock-step applauding it) (okay and to be fair, the Democrats lock-step critiquing it) (the only difference being who *I* think is right); so, to what end the State of the Union?

As best I can tell, under the Bush Doctrination, the purpose is to reiterate his foolish consistency and perpetuate the myth of his (false) heroics, not to mention fire back up the fear and remind us all that anyone who disagrees with him is unAmerican and will lose civil liberties as such. Shades more of King George...remember him? That mad, mad fellow who many men fought against for liberty, the liberty written up so eloquently in the Bill of Rights and Constituition?

The State of the Union, televised in simulcast and high-definition, is really nothing more than an arena of false heroics. Bush ought to have a Dramatic Chorus behind him singing praise, glory and amen after each major talking point.

It's one of the funniest recaps of the show AHEM I mean State of the Union I've seen yet.

In case you don't have time to peruse the many comments, let me highlight some of my favorites:

Loved Rummy's two-finger point- while leaning backwards, as in "YOU DA MAN", to some guy... -Best Actor in a Comedy
Posted By Tina -Chicago, IL : 3:27 PM

I am not sure what award category it would be, but I believe Senator McCain deserves a nod for keeping it real. Maybe it would be the Politician Who Most Resembles a Human Being During a Superficial Event Award.
Posted By Christine, Canton, OH : 4:05 PM

Best Comedy? - George Bush...everything that comes out of his mouth is a joke.
Posted By Valerie, Montreal, QC : 4:10 PM

My award for best "crockunmentary" has to go to Carl "Marx" Rove. He makes you beleive the unreal.
Posted By Perry, Glendale, AZ : 4:20 PM

I nominate myself for an award in choreography, since I'd place some "Robert Palmer Girls" while Bush sings "Addicted To Oil"...
Posted By Frank, Brooklyn NY : 4:27 PM

BEST FOREIGN FILM: The Iraqi People. 40 minutes on Iraq and the war on terrorism. 30 seconds on the plight of New Orleans.
Posted By Allan Burlington KS : 4:51 PM

***Note: And no word on the rest of the Katrina and Rita victims. Who is going to come harvest my hurricane-induced corn? Huh? Who?