Things you need to know about this world we live in

Let me tell you a funny story.

Moving down here is like moving into the subtropics. Oh, or, wait, it's not like it, it is moving to the subtropics. It's an adjustment as I learn about new and different timing for seasons, plant care, different sorts of plants (all of which appear to be some variety of weed/allergen or hibiscus, oh except for the plethora of azaleas).

My husband and I have always believed in xeriscaping and water conservation, which is no problem here where it rains every day during the growing season and everything grows really well, almost jungle like. It's a daily battle to keep the vegetation from taking over, actually.

We have a very large lot. The first half of the backyard is lovely flat grass---St. Augustine, God Help Me---a perfect soccer field. Halfway back the tree line begins and the rest of the yard vanishes into dense growth. Last fall I noticed all of my neighbors doing something called cutting back. This is where you trim things back to nubs. Despite joining a gardening club and going to master gardener lectures, I still know nothing about this whole gardening business and regularly manage to kill everything I plant.

I contrived to hire a neighbor with a green thumb. He has a landscaping business and regularly clicked his tongue at my yard. He named a price to fix everything, I accepted, and he got to work.

We chatted off and on as he did the job. I explained how since moving here my allergies are so bad I rarely go out of doors, but at this house, it seems even worse. I said I couldn't stand to be out back.

"Do you think," he asked, "That it could have anything to do with the large crop of ragweed you are growing near the back fence?"

"Isn't that Ambrosia?" I asked, suddenly fearing the lovely, rich, lush, full bushes I had so admired with their ball-like yellow blossoms.

"Ambrosia is common ragweed!" he laughed at me.

That's the trouble with everything down here: it has two names, and one makes it seem benign and lovely. 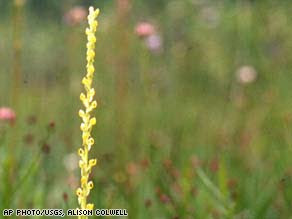 After that story and the previous photo, I imagine you look at this lovely plant to the left and probably think of ragweed and allergies. No, not ragweed, but it's much, much worse.

This beautiful flower is actually an orchid. It's unique to Yosemite National Park.

I know...you want to rush out and get one for your home right now.

On CNN, I learned

Botanist Alison Colwell said the species' minute, tennis-ball yellow flowers weren't what first led her to it, but rather the smell of sweaty feet that the Yosemite bog-orchid emits to attract pollinators.

"I was out surveying clovers one afternoon, and I started smelling something. I was like, 'Eew, what's that?"' said Colwell, who works for the U.S. Geological Survey in El Portal. "It smelled like a horse corral on a hot afternoon."

The plant, which is the only known orchid species endemic to California's Sierra Nevada range, grows in spring-fed areas between 6,000 and 9,000 feet, Colwell said.


The plant was first collected in 1923 and recently was identified as a distinct species.

Now the greatest fear is that it will be trampled.

I think the smell ought to deter most curious people, if not a short sign:

Step on this and people will think it's you who smells.

I felt compelled to share this in case anyone was going hiking in Yosemite soon. A PSA because I like you.

Further---also in the event that you are hiking in a national park---you have a greater chance of seeing a bald eagle. The birds are now officially off the endangered species list.

The danger to the species was first noted in 1963 when only 417 breeding pairs were found in the US. Today, that number is up to 9,789. Apparently, exactly.

The recovery of the bird is attributed to the ban of DDT in 1972.

Silly wildlife, always getting into chemicals that are bad for them. Listen up woodland creatures: just say no!

In all seriousness, I am really glad that the bald eagle is healthy and hale again. I'm also glad that they will remain a protected species. This doesn't, however, protect their habitat. Landowners are even happier about the change in status because now many---who have waited for years---will be able to develop their land.

Christine said…
i swear i think i have seen (smelled) this stinky feet plant somewhere!

Unknown said…
There's a corpse flower at the local arboretum. Every few years it blooms and people line up to smell it. A. Corpse. Flower. It smells like a dead body.

Julie Pippert said…
LOL Christine! Make sure you go to Yosemite and walk on any yellow flowers. ;)

If you read the article orchid collectors are beside themselves with excitement due to its rarity.
July 26, 2007 at 9:41 AM

Lawyer Mama said…
I read about that stinky feet orchid!

Your yard sounds very much like mine. We have a jungle going on here too, although not as bad as we did in D.C.!

Now all I can smell is stinky feet. Do you think anyone would care if I washed my feet in the sink in the bathroom at work?

Anonymous said…
Here in London our allergies are bad due to the large crop of mildew and the other large crop of pollution.
July 26, 2007 at 2:50 PM

Snoskred said…
Is that Haiku slouching mom? :) I can never remember the rules for that. ;)

I can often see eagles from my window here while I sit at the computer, we have a lot of them in Australia.

Anonymous said…
The tree I hate to smell is the Catalpa.

Julie Pippert said…
Emily, we have perma-mold and mildew here. I think it is wetter here than there even LOL.