Because if you can't laugh at yourself...

So, in times like these I take my humor where I can get it...and I got it a lot this week. I decided to share, in honor of it being Friday, the day before the weekend...what I used to call the Last Day of Work before WOO HOO the Weekend but now I just call Friday. LOL 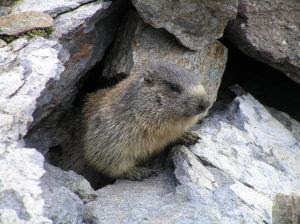 On Thursday I had to drive into the city using the highways. This is highly annoying for many reasons, one of which is the monstrously offensive bumper stickers many drivers here have---such as, "Don't like English? GO HOME!" and "Bush Cheney Let's Do It Again America!"

So I look for the Happy Messages that affirm my world view instead. Happy happy. All is happy for Julie in Julie's World. La La La.

That's when I saw it. The big white truck with huge message splayed across the back:

While hunting for beaver photos to illustrate the above story, I ran across: 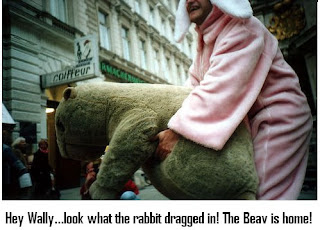 And I had to put it up, just in caseLaura, Chookooloonks, or Kyla dropped by.

3. The ways in which people round these parts know I'm not a native

So it came up last night while we were out to eat that when you move into a new region, sometimes it is hard to know the proper local pronunciation of things.

I am notorious for this, for mangling local words, that is. Here, anyway. I do all right in most other parts of the world.

My two most famous happened only last month, in May, in public thankyouverymuch.

I mentioned in May that I had my last fundraiser of the season thankgod. I was in charge of the silent auction. So I stood guard over the valuables, by which I mean I remained sociable and available to answer any questions from bidders. We had a large number of tickets to really cool area events, including a pack for a large group to go to a popular comedy club. The club recently moved locations and is on a new street, so several people had questions about where it was. I didn't know; I still don't know the area here. But I gave it my best shot.

"I don't think I know this street," the lady told me.

"ExCUUUSE me?" the lady said.

My friend Stacy snorted and snickered behind me. The lady looked something between confused and offended.

I turned around and saw Stacy and my other friend Melissa clutching their sides laughing.

The lady pursed her lips and brows trying to follow.

"Or," my friend Stacy interjected between laughs, "For those of us who are FROM HERE it's FEW KWAY."

Everyone consensually agreed that yes, it was FEW KWAY not FUCKWA. And they all looked at me like I had been smoking the funny weed.

Melissa said, "Oh my God, Julie, this is even funnier than the time when we were getting the grant and you called 'EL HARDEEN' 'LE ZHARDAN' to the city council!"

Fuqua. El Jardin. How would you say that?

And finally...not so much a funny story as a request...

4. Sometimes a standard is a really good idea

After all my business was concluded on Thursday, I met my husband for lunch. On the way out we stopped by the restrooms and it occurred to me that we have a serious problem in this country: a lack of consistency for bathroom sides.

When you walk into the bathroom hallway, which is it: left? or right?

This leads to that incredibly awkward moment of pausing in the doorway to the hall, with the entire dining room at your back, and glancing both left and right to ascertain which way to go for your gender.

Even worse is when restaurants get cutsey and use funny symbols, odd hard-to-read fonts, and foreign languages to say "men" and "women."

Who enjoys that WHOOPS, that's not a skirt on the figure on the door, it's a PONCHO and this is the BOY'S ROOM times? Not me. Thanks.

Arial or Roman style font, all cap and large (for visually impaired) and Men for men, and Women for women. 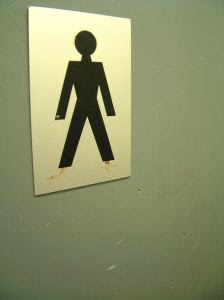 Although at least this figure is clear---and not accessorized with something like a poncho (which obscures the gender, trust me)---a non-skirted figure doesn't need to mean Man. So a distinct figure like this is okay but can we also put the gender name by it? Please? Thanks.

Christine said…
Julie, girl, you crack me up!

Anyway, I should really be packing and, uh, leaving right now.

Aliki2006 said…
Great post! We have a town nearby called Fuquay and we were at a TOTAL loss as to how to pronounce it when we first moved here. It is, surprisingly, pronounced in the same way as that street you mention.

Kyla said…
Oh Julie! This was much needed...and when I got to the furry, I almost spit my coffee everywhere.

Fuqua! Hilarious! So, so funny. I'd have paid money to overhear that conversation.

And on vacation? I walked in the MENS ROOM at Schlitterbahn. I saw a man toweling off and said, "Uhh, is this the men's room?" to which he replied, "Why yes it is." and I scrammed. My dad went to the restroom and said, "They are talking about a lady who just walked in....know anything about that, Kyla??" *lol* I was cracking up.

Magpie said…
Fuckwa! I love that.

Julie Pippert said…
Christine, thanks for dorpping by before heading out. Give a shout when you are back!

Aliki okay now if there had been a Y at the end that would have meant something! LOL you had that one too!

BTW, I would have said Car for Kerr. It's a Scottish thing.

Kyla, that makes me unspeakably happy. I am so glad. :) I mean the fact that it has made you laugh.

Your restroom story...now that's hilarious too. You see the need!

I'll be glad to say Fuckwa everytime I see you. Maybe the furries can ply their trade on Fuckwa. ;)

Err what else is fun? Oh have acquired "cahn't" as a result of many years in MA.

So how do you say Houston?

P.S. I rarely call that city by name. I call it "going to the dadgum city by means of the horrorways." But I have confessed to a side helping of drama. :)

I got into the habit of calling Boston 'Town' so now I just expect everyone knows which 'City' I mean around here LOL.

thailandchani said…
Fuckwa! That took some nerve on the part of the city engineers who named that street!

Have you ever heard how the locals pronounce "Norfolk"?

I'm laughing with you, not at you.

I'll have to tell you about the time I used the men's restroom at Disney World. I have problems with that even when they prominently display the word WOMEN over the door.

Anonymous said…
Hee! My husband and I once planned to publish a coffee-table book of weird mens/womens room signs -- don't kill the dream OK?
June 29, 2007 at 10:08 PM

Anonymous said…
I'm with Lawyer Mom. If I don't pay some serious attention, I end up walking into the wrong bathroom even when they are clearly marked.
July 1, 2007 at 8:03 AM

Anonymous said…
A family in Atlanta known for philanthropy is Fuqua, I pronounced it the same way you did. OOOps.
July 1, 2007 at 8:44 AM

Queen of the Mayhem said…
How well do I feel your pain on this! When I first moved here I could NOT get the French name pronunciations handled!