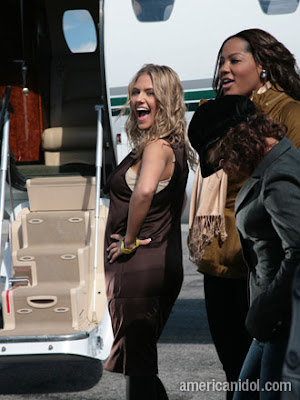 HOUSTON -- After last night's American Idol women's competition, 5.3 million teens boys from around the United States decided to move to Oklahoma and Texas.

"Oklahoma and Texas seem to be the epicenters of hotness in girls," said Shane Smith, 17, leader of the group Boys Just Want to Have Fun, "We're young---our average member age is 17---and we like hot girls. We also like music. So the only logical thing to do is move to Oklahoma and Texas, where there seem to be a lot of hot girls who can sing. American Idol opened our eyes to this."

Smith and the Boys Just Want to Have Fun members wrote and signed a manifesto citing Texan Kelly Clarkson and Oklahoman Carrie Underwood as their major inspiration.

"Kelly Clarkson said one time in an interview that she was not the hottest thing growing up, that means there are hotter women even than her in Texas," Smith said, eyes wide. Smith plans to settle outside of Dallas.

To prevent population surges in any one area and to cut down on competition among members, the group plans to disperse evenly around the two states. Members will be assigned cities via a randomized computer-generated lottery drawing.

The states can expect good behavior and model citizenship out of their new residents.

"We have to remain in school and keep our grades up," said member Troy True, "We're about having fun, but responsibly. None of us are into those Abstinence Pledges or anything like that but we can't do illegal stuff or get kicked out of school or anything. That happens? It's back to Minnesota for me."

True hopes for one of the Texas coastal towns, where he hears the girls are hip, talk Southern, and wear bikinis frequently in the year round warm temperature. "They say the Midwest farmers' daughters really make you feel all right, and I guess so, but I haven't had a date in a while and I think I might be related to most of the girls in my small town, anyway," True explained, "So I can't wait to see those Texas girls. Although Oklahoma would be all right. You think Alaina Whitaker has a sister?"

"They didn't give their best performances last night, but Kady is hot, and did you see her Britney Spears impersonation? She's hilarious too! They really grow girls right in Texas!" said Smith.

The group has Facebook and MySpace groups, and chats on Twitter during American Idol episodes. Membership is currently closed, pending final plans for relocation of group members.

American Idol runs on Fox at 8 p.m. Eastern Time (7 p.m. Central, for the relocatees) on a variety of nights. Set your Tivo and you won't miss it. iTunes is offering fans the opportunity to download favorite performances, as well.

SciFi Dad said…
Exactly. That show is about attractiveness/marketability, not talent.

But, when I read this I couldn't help but think of a bumper sticker I saw when driving through Houston one time: "American by birth. Texan by the grace of God."
February 21, 2008 at 8:38 AM

Jenny, the Bloggess said…
Awesome. They will be legal right about the time that I have a mid-life crisis and go all cougariffic.
February 21, 2008 at 9:25 AM

Anonymous said…
Aaaaaaand another reason I'm glad I don't watch TV (much). It just keeps pumping out the stereotypes while the passive viewer keeps inhaling the stereotypes. This validates my choice to never watch Idol.
February 21, 2008 at 10:51 AM

Robert said…
I have a shirt like Scifi Dad described, but mine says "American by birth, Bulldog by the grace of God."

niobe said…
I'm laughing at myself, 'cause I've read this twice through and I'm still not even coming close to getting it. Time to go back to sleep.
February 21, 2008 at 11:12 AM

Julie Pippert said…
The clue to what this is about comes from the commenters:

Jenny -- this made me laugh out loud

I will often resort to the cheap tactic of sarcasm, mockery and cleverness (if I may be so terribly full of myself) to get a laugh.

Sci Fi Dad -- that show is about marketability

I tackled this point because, as an artist, it can be a daily challenge to know that it's not so much about being good as being *right* (for the market).

Prof J, Kyla, and Melissa -- it's all about the image

Stereotypes amuse and frustrate because they are maddening boxes for cheap, quick and mindless thinking but are also annoyingly accurate at times.

People aren't going to find two states full of Kellys, Carries, Kadys and Alainas. But they will probably find a disproportionate number of people in that vein.

Jenny and Kathryn -- boys want to have fun

There's no deep hidden meaning. And it's not really anything beyond an Onion-esque riff on a point my husband and I were laughing about while watching the show last night (that had to do with all of the above).

dharmamama said…
I used to be an American Idol snob: "*sniff* They're not true artists!!" but I was missing the point. They're not supposed to be true artists, though some artists do get discovered. Marketability, indeed. It's entertainment, and I've come out of my ivory tower to enjoy it every now and then. I was moved to tears the first time I saw Fantasia, and was so glad when she won.

Your article did remind me of the Onion! That's some nice writin' there, missy. We (NC) got Kellie Pickler, Fantasia, Bucky Covington, Daughtry, and Clay Aiken. Nice that they don't really have much in common but entertainment value and state of origin.
February 21, 2008 at 11:56 AM

Jeff and Charli Lee said…
Very funny. Better watch out because this might get circulated on the AP!

As a past road musician who spent many, many months in TX (especially Houston/Galveston) I can state unequivocally that TX girls are indeed hot. Please don't ask me to elaborate on the grounds that I might incriminate myself.
February 21, 2008 at 1:21 PM

Emily said…
Born and raised in Oklahoma, I am taking this article as strictly factual.

Melissa said…
Thank you for the chuckle...I really needed it this morning. :)

We're watching AI over here on a one day delay... so we just watched the girls (and the results) last night.