Top 7 Things I've Learned Thus Far on Spring Break (or: Rumors of my AWOLness are not at all exaggerated) 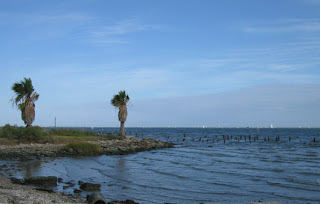 Okay so I have been on Spring Break. That means this girl likes to party all the time, which apparently doesn't include anything relating to blogging other than hanging out with bloggers in real life. Although party has a new definition these days and seems to cap off at 9:30ish, it's about quality not quantity.

(I swapped out the image; the first one was freaking out visitors. We can't have that! So I subbed in a nice local beach shot instead.)

In no particular order other than as they occurred to me, here are things I've learned so far this week while on Spring Break (which is not finished yet):

2. The mouse car makes good time. And gets decent gas mileage. No, really. Mine does. It's called manual transmission, friends. Sometimes control freak and Luddite combine well, for the good of the planet.

3. SXSW music festival is still cool after all of these years. I even recognized the names of a few bands (thank you Grey's Anatomy soundtracks).

4. Canadians, particularly Not So Sage and Something Baby Blue, are wicked cool people. And they know how to rock it Austin-style. I have a photo. Yes, one. But it's on someone else's camera and I have to get it back. Hooks and crooks in planning stages. I must also mention that they are amazingly tolerant to be dragged on a tour of my romance with my husband, "And that's where we had our first date, and oh we're eating at the scene of our first big fight, and then over there is where I used to work, and wow, that building is where Jon and I went to our first big dress-up party, and dropped hand-made mini-parachutes off the balcony..." I can be grateful, I think, for the fact that Canadians are amazingly well-mannered. Until the next point, when I feel guilty about not being Canadian enough. ;)

5. You can freak out Canadians very easily simply by dickering with your waiter over the bill. Apparently, they are unaware of the Tejano SOP for bargaining over a mistake on one's bill, and the deep and abiding long-term respect one can build by being (shall we say) diplomatically passive-aggressively insistent that it be corrected. I saved us $12 bucks people. You know you were impressed. But not half as impressed as I am that a vegetarian would eat meat rather than complain to a waiter. ;) You come spend more time with me. I'll have you fixed in a jiffy. Also? I do not actually bathe in the blood of virgins to maintain my youthful appearance. That would be ridiculous. It would be way too much trouble to find a virgin. And speaking of like a virgin...

6. Angelina shops at Wal*Mart. ANGELINA JOLIE, people. L'Angelina. Yes, she and Brad are filming in Central Texas. Despite our best efforts, we did not happen across Brad and Matthew dining together on Congress Street. It would have been sweet. <-- That's what we call an understatement. But...alas. However, I would not have found them hot if they started chomping aluminum cans. (One of us---the Super Cool One with a BADGE---had celebrity brushes, but it's her story so you'll have to read her blog.)

7. Kyla is a really good friend because she did not laugh once at my need to eat Swedish Fish obsessively while road tripping. And she did share her Smarties, which I got about six total of after my kids found the box. However, it is here that I learned the NUMBER ONE thing so far on Spring Break: Smarties are simply OLD FASHIONED M&Ms!! Yes, friends, the M&Ms of my/our youth. You know the ones, the way they were before the "melt in your mouth, not in your hand" campaign! I am so going to Canada for my candy now. I bet you guys even have proper cherry sours, soft center ones that make you pucker for a second before ODing on sweet. We'll make a trade of it: Canadian candy for Mexican vanilla. You foodies. You know you want it.

Okay folks, I am on the road again...will see you later. Sorry I haven't been by your spots. I opened up reader and had over 300 posts accumulated. I confess I am likely to click Mark All Read.

I won't mention that other than threats of a storm that never materialized (not here anyway, sorry north Texas folks and mid-west folks who got nailed) the weekend at SXSW was hot (low 90s) and the week has otherwise been sunny and 70s. Perfect Spring Break.

P.S. Jenny, I'm sorry, although I hugged the Canadians I forgot to attribute one to you. Bygones?

P.P.S. I have to thank the incredibly cool people (Gwen, Melissa, Andrea, and Emily) who actually seemed to miss me. Whew, balm to the soul, ladies. (Sorry for lack of links, am on the road again.)

Anonymous said…
The picture really gives me that creepy feeling.

Glad you are having fun.

And the guy did not keep the can girl because he likes her. No, she scares the crap out of him, too. That was the producers telling him they needed him to keep some of the girls who had been beat hard with the crazy stick, and since underwear chica was obviously not going to make it, they chose Jaws instead. (that paragraph only makes sense if you watch the wonder/horror show that is The Bachelor).
March 21, 2008 at 8:28 AM

Kyla said…
Although I'm on a bit of a blogging break, I noticed you hadn't posted in days and I clicked over to make sure my reader wasn't doing that thing where it doesn't pick up up for some reason. It was WEIRD not seeing anything new from you in my reader!

Melissa said…
Ok, that's fine, but you should have stopped by and said hi. I make wicked margaritas. Snif.

I suppose I'll have to learn to live with the disappointment. ;)

thordora said…
Some of us argue the bills....just not very hard. :)

Magpie said…
So that's where you've been!

Mad said…
I knew you were on the road but I still clicked over a couple of times from the Reader just to make sure b/c the silence was deafening.

Julie Pippert said…
Gwen, I TOTALLY think he thought it was hot. I'm sure he got told to pick the crazy stick chicks but I think he was all into it. PLUS clearly she has had it well-reinforced by past men that it is hot. Otherwise why pull it out to attract this one? UNLESS IT HAS WORKED SUCCESSFULLY PREVIOUSLY. SNOG! LOL

I was more amused, though, by his face when the Rovian Acolyte said her spiel about how she worked for Bush's brain.

Brits are obviously much better mannered than me because I am sure I could not have stopped more than 50% of the comments that would have opened up for me. ;) In point of fact...I just let them all come rolling right on out, since I am smart enough to *not* be on TV.

My non-gossipy husband tells me that moment is dominating the politico blogs. :)

Thanks for missing me. :) Chani, thank you. Mad, it does the heart good to know my silence was deafening rather than relief. LOL Jeff, always have it in me. I have been imposing myself verbally on many people. Also I have less to rant about when hanging out with my race of Joseph.

Jen and Christine, I did get to meet Sage, who is TOTALLY AWESOME. I also had the pleasure of meeting SBB who is absolutely fabulous. It was not enough time.

Kyla and I road tripped there together. She is an excellent travel companion, among other good reasons to know and hang with her.

Yolanda, from your lips to my ears. :)

Angeline and Kathryn, improved visuals for you.

Melissa, babe...next time. We can stalk movie sets together. On?

Anonymous said…
totally missing you, envying your trip, looking forward to your return.
March 24, 2008 at 8:29 AM

S said…
Of course I missed you, babe. But I knew where you were, and I didn't expect to hear from you...

Plus, busy with real life over this way, too, and not blogging as much as I usually do, either.

So you've got company.