In their beautiful balloons... 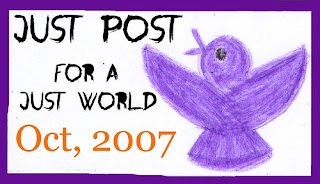 Note: Today is the monthly announcement of Just Posts. There are four hostesses, but, I'm in a rush so will link to Mad, the first one who popped in my Reader. Go check it out!

Last weekend JSC (that's Johnson Space Center) hosted the 2007 Ballunar Festival. It's just one more super family event we have around here. Normally it's held in August, but since the entire summer will forever be known as the Terrible Three-Month Neverending Monsoon of 2007, the event was delayed until now, in November.

Because I'm not some sort of masochist who enjoys steaming myself into a lobster in the "sultry" August air here, I far prefer the event in November and wish it was held at this time every year. (Dear Sponsors, I actually came this year and spent a lot of money because I was so enjoying myself in the cool weather. Signed, A Potential Loyal Customer.)

There are more hot air balloons than you can imagine at this festival. It's got sky diving, astronauts, and of course, the hot air balloons. Live bands, booths and booths of food and stuff to buy, a huge area of inflatable fun for kids, and my favorite, an insurance company with teams of masseuses offering free massages.

We went to see one of the fire ups, which is when all the balloons line up and in concert fire up their fires and puff up the balloon.

The kids were thrilled.

On Saturday evening, Patience had her soccer game. My mother was in town, and my sister Flavia and her entire family drove down so there was suddenly a Huge Crowd.

The kids were happily and energetically playing soccer (finally; evening games for kindergarteners = not a great plan) when some round specks appeared on the horizon: 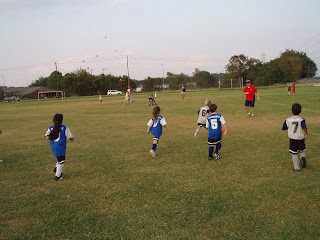 (All photographic credit goes to my mother, the only one who brought a digital camera. Mine mysteriously vanished. I'm back to film. Which I haven't yet developed. The brown haired running child is Patience. In the back, if you can make it out, my husband and brother-in-law co-opted a field and began their own soccer game of two on three, two on two, three on one and further variations as kids dropped in and out and switched teams at random. Amazingly, two two years olds and a three year old don't get the rules.)

Upon closer inspection, it was a gaggle? flock? of hot air balloons. 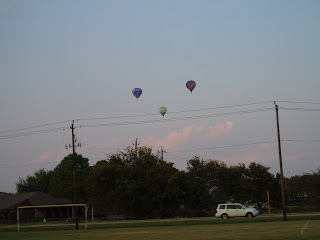 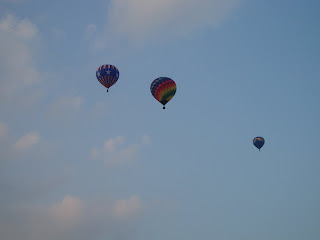 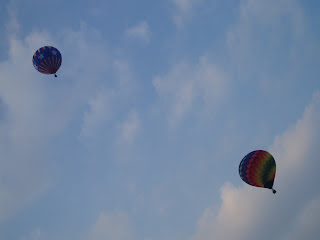 The coaches struggled to keep the kids' attention on the soccer game, and the game going. They fought a losing battle. Even the parents were distracted, staring and pointing.

It wasn't sudden; in fact, it was gradual and yet, it was still a surprise when the balloons began dropping...right on to the soccer field. 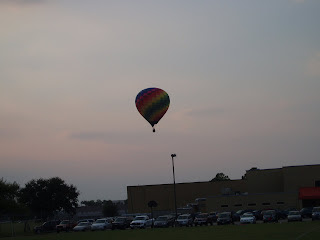 Games abandoned without a backward glance, we all ran to the balloons, now vulnerable and collapsing to the ground. One shot huge flames into his balloon in a last attempt to get back into the sky, but the air was too still and wet and heavy. Not even a balloon could fly in it. The baskets touched the ground gently, hopped up once, tilted a bit lopsidedly, and then settled, flat, firmly. The brightly colored balloons floated down, sideways, to also rest on the ground. The balloonists hopped out of the baskets and quickly began rolling and folding their balloons. Two trucks screeched up to the side of the field and several more people hopped out of each. They ran to help fold and roll the balloon, and then everyone grabbed a corner of balloon or basket, hauled it to a truck, hopped back in and sped away.

The balloons landed and were hauled away within minutes.

With a sigh, we all released the moment.

We turned and trudged back to our spots alongside the soccer field, and the coaches resumed the game...one more play. When the whistle blew, the children ran off the field in a burst of relieved release, excitedly chattering about the balloons. They jumped and twisted in the air, bodies flapping in an attempt to imitate the balloons. A few even spun and floated to a crumpled heap on the ground. Little arms and fingers pointed to the sky, retelling the story with words and actions to seal it forever in their memories.

Like the balloonists, we quickly packed our things, and left the field to cars.

Have you ever seen something incredible in the middle of the ordinary? Or something that struck you as incredible?

Mayberry said…
What a fun experience!

Suz said…
How wonderful and wonderfully exciting - I've never seen a hot air balloon close up and am sure that it would be an almost surreal experience to see them suddenly land in a soccer field.

About five months ago, I was on a perfectly ordinary commuter flight (so ordinary that I forget the destination) when we flew right into a thunder storm. Almost everyone there, newbies and veteran business travelers alike pressed noses against the windows to view the awesome clouds thrust into view amid bursts of red-tinged light generated by the lightening strikes between their banks.
November 9, 2007 at 9:19 AM

the dragonfly said…
This might sound silly, but there's just something magical about hot air balloons. When I was twelve or thirteen my family went on a balloon ride for my parents' anniversary. It was one of the most amazing experiences ever. We landed in a farmer's field, and gave bottles of champagne to the farmer and his family as payment for the landing space. Every time I see a balloon I get a tingle of excitement, remembering the magic of floating through the air, looking down at the patchwork of Michigan autumn.

Anonymous said…
You know, everu single time I see a rainbow I feel that way. Maybe I'm a closet sentimentalist.
November 9, 2007 at 9:43 AM

Victoria said…
Wow - my Boy would have loved that.

I once, on a vacation at the beach, stumbled upon a 5am poetry reading as I walked along the ocean. There sat a dozen senior citizens, around a fire, reading their works. It. Was. Amazing.

niobe said…
I've certainly never seen anything even remotely like that.
November 9, 2007 at 1:22 PM

Cathy, Amy and Kristina said…
I would have loved seeing something like that.

When I was in high school, a friend and I saw a Russian satellite fall. We were on a country, two-lane highway when we saw something huge and bright streak slowly across the sky. I was so stunned, I stopped the car in the middle of the road.

When we arrived at our destination, another friend came running out.

We spent the night wondering what that bright object was.

The next morning, the newspaper had a story about the satellite.

I still remember the awesomeness and thrill of that moment.
November 9, 2007 at 2:16 PM

Anonymous said…
A giant swarm of bees coming over the baseball field at my elementary school. The sky went dark with them and everyone screamed and ran. I was the only one that got stung (once behind the ear) but for some reason it was worth it. So surreal and almost unnaturally amazing.
November 9, 2007 at 3:56 PM

painted maypole said…
great description. we had a balloon festival in the town where i grew up, and watching them take off was so cool!
November 9, 2007 at 5:21 PM

Aliki2006 said…
How fantastic--how breathtaking! Liam would have loved to see that.

I have a few moments like that--I'll mull them over and remember them again--they were truly magical.
November 9, 2007 at 6:48 PM