Outed or How rumors (or rumours) get you every time 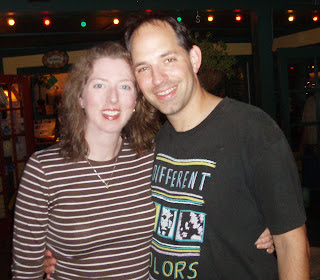 It's true. I had a birthday. I turned a year older, a year closer to leaving my 30s behind. Believe it or not, I'm okay.

I have this thing I do with my birthday year. When the new year flips, I flip my age. I realize that's almost a year in advance, but this way I am well-used to the age by the time I actually turn it. And I got used to it while knowing I was actually a year younger.

I will, if asked, admit to the older age.

This makes my husband crazy. He feels compelled---despite more than fifteen years of negative consequences for doing so---to correct me, "Well, she's not actually 29, only 28, she'll turn 29 in November."

Now everyone is uncomfortable, except him, who has gotten the Truth Out. I feel like a liar and am compelled to explain to the other person who doesn't care one iota about it, although no matter what, the other person likely thinks I'm a freak. I'm okay with that. I release my annoyance by slugging my husband in the shoulder. I also highlight his every single slightly less than completely and fully 100% truthful statement for the next week. Because I am big and mature and not at all into holding grudges or proving a point that way. (Psssst INTJ Scorpio...my bite is worse than my bark.)

Turning this age has ruled out a career possibility for me. I am now officially too old to be a foreign service agent. Believe it or not, this job possibility has been on my radar for a long time. However, now I am too old. The foreign service? Has no use for me now.

I was exceedingly happy to learn this from my neighbor's big personality Some Secret Agency with an Alphabet of Letters Not to Be Named agent friend. He observed---with an unholy degree of relish---that wow, I am years older than him (and his barely legal girlfriend) (just three older than him) (but about 17 years older than the girlfriend) (who was my BABY brother's age) (the one who when he comes to visit me I say obnoxious things like, "And when you get back to your dorm room call me RIGHT AWAY so I know you are home safely," and "NO SPEEDING, keep your radio volume low, and no talking on the phone while driving!" and he says, "Whatever 'Mom!'") and then went on to think a moment and say, yeah, now you're too old for the foreign service, too old to be any use.

As a consolation, he added that people my age could still get desk jobs.

I'm hardly so old to be put out to pasture, my friends, or to move from "jockey" to "desk jockey."

I promised to for real this time go take the foreign service exam, even though it "kicks butt" and us older folk sometimes have trouble processing and recalling.

The processing and recalling part is true, to a degree. However, the situation is that I now forget more than I ever knew a decade ago. So perhaps I'm still on the same level I was a decade ago.

A decade ago, my husband and I had been married for four years, were living in Massachusetts, and had just decided it was about time to think about having kids. I was excited about a prospect that, if you asked me, I felt had a low probability of coming to pass. From the beginning I had a weird feeling something wasn't right in my body and that I couldn't just "get pregnant." I wouldn't want to replay the end of my 20s for love or money, which were central themes of that time, as were hope, heartbreak and despair.

In fact, I would not want to repeat any of my 20s, which, looking back, seemed a lot like a repeat of my teens except with a larger paycheck and no curfew. Oh, and a husband, instead of a boyfriend (du semaine). I'm okay with this age. I actually feel really okay with my so-called oldness.

So what does someone turning this age do to celebrate?

The same thing someone turning 2 does to celebrate!

Have dinner at Lupe Tortilla's (and if you don't have one? I'm so sorry. This tex-mex restaurant is built around a sandbox playground and is an absolute Xanadu for dining families).

Have cake and ice cream.

The only difference? Big girls get margaritas!

(This is the exact birthday my nephew had last weekend, minus the margaritas.)

Amanda said…
I think if you can hold on to the knowledge that we are not tat different from 2, than you'll do just fine.

Happiest of birthdays to you, that is until next year's.

Kellan said…
Happy Birthday, Julie!! I loved - "The only difference? Big girls get margaritas! (This is the exact birthday my nephew had last weekend, minus the margaritas.)" - so cute! Have a great weekend! I wish you all the best - truly! Kellan
November 4, 2007 at 11:15 AM

Aliki2006 said…
Happy Birthday! And I'm amazed because I do the very same thing with my birthday year--I flip it too, so that when the actual b-day rolls around in August I'm more then well-prepared.
November 4, 2007 at 11:25 AM

thailandchani said…
Well, belated happy b'day.. and I have a very hard time imagining you at a desk or in the field with the Culinary Institute of America.

You have too much integrity.

flutter said…
Here's to being wiser, with the more hours you live and achieving peace and light by doing the same.

Sunshine said…
We make a very big deal about birthdays around here, the big kids (hubby, myself, my in laws) and the little kids too. I think birthdays are wonderful no matter what number they are.
November 4, 2007 at 2:50 PM

Bea said…
My mom does that too. I totally forgot her sixtieth birthday - but it wasn't my fault! She's been saying that she's sixty every since she turned 57.
November 4, 2007 at 3:30 PM

Christine said…
oh--and i am really behind on blog reading, so please forgive me if i don't comment on some previous posts--i'll try and catch up with reading at least tonight and tomorrow
November 4, 2007 at 3:45 PM

My Dad lives in Clear Lake, so we go to the one out there almost each time we visit. We used to live in West Houston, so we would go to the original off of HWY 6. Don't know if it is still there.

Being offically mid-thirties myself, I know how you feel. Can't be in the foreign service, but you can be president. :)

Gale said…
Happy Birthday and many more!!!
Funny for years I couldn't remember how old I was, ummm avoidance? perhaps.
November 4, 2007 at 7:27 PM

joker the lurcher said…
embrace your age! at my fortieth (8 years ago) i had a party which started at 4pm so people with kids could come, and by 4am the only people still up and dancing were the 40 year olds and over - all the youngsters had gone to bed!
November 5, 2007 at 1:04 PM

Jeff and Charli Lee said…
I hate it when I'm late to a party (wasn't home this weekend). But I hope you will still accept my belated but sincere HAPPY BIRTHDAY wishes!

Angela said…
Happy Birthday! I have to admit that I've always been fine with birthdays until this last one where I officially rolled past the top of the hill (40). Now I tend to think, gee am I too old for this or that. Really I'm not, but the mental block is settling down and staying there. Hope you manage that hurdle with grace!
November 6, 2007 at 12:38 AM