Meet my sister Flavia, she has Less to Say 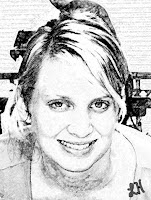 So my sister---who some of you have met on your own blogs---has agreed to blogsit for me when I am unable to blog.

This is my nefarious underhanded plan to get her to start her own blog, or at least a joint blog with me. I'm liking "Divine Secrets of the Ha-Ha Sisters" with subtitle/caption "The All True Adventures of Lola and Flavia Honobutt." These are our real names, or are at least the ones we tormented each other with our entire lives.

I even created a blog for her: Less to Say...Your Blog Brain Candy (you can follow that link but you'll just find a blank blog...for now...)

This is her idea, this title. It's funny. It's punny. It's very her.

It's also her Antithesis of Me, which pretty well sums up her main motto in life growing up (I mean, after she realized she was not, in fact, an extension of me...a sad, hard day for me, indeed, her too, probably). (And I say that lovingly because I'm fine, FINE I SAY, with it. After all, I didn't grow up second, coming in behind First all the time. Nobody ever said to me, "Oh you're Flavia's sister!" But apparently plenty of people said, "Oh you're Julie's Little Sister!" like it was her name, rank and serial number. Don't worry, I had my own Private Hell as Oldest Sister, trust me.)

Flavia is the Pretty Sister (remember she looks like Uma Thurman), but her IQ is also higher than mine*, although I act smarter which actually counts for more, I think. And I went to a better university.

She's a better athlete but I'm a better dancer.

We're dead heat even for Funny Sister. She's a little raunchier than me and I'm a little drier and more obscure than her (like she wouldn't be caught dead doing a remake of Shakespeare, but she'll make you LYAO with hilarious synopses of TV shows, quick quips, and recaps of kid events)

Also dead heat even for Crazy Sister and Normal Sister.

She was more overtly naughty growing up, more frequently, more typically, and tended to get caught. When I was naughty, I was very naughty, but less often and far more covertly, rarely getting caught. Still waters running deep and all that.

Flavia is an extrovert, as much as I am an introvert.

But...we both read a lot, are tv-aholics, have the same attitude about our kids, and are guaranteed for a good time.

I'm really excited you'll get to know Flavia; she's a cool chick. A good sister to have.

And I deeply appreciate her blogsitting for me.

I know you guys will be gentle and supportive; she's a Blog Virgin. And she responds very well to outward expressions, like tons of comments, so chat away with her.

If she feels really encouraged her blog might fill up instead of sitting empty, and I think you'll find (as she will) that once she gets her blog legs under her, she'll be a great blogger.

*My IQ may have caught up. I feel confident in this because Flavia has twice as many children as I do. No, this isn't about I think she's crazy to have 4 kids; Flavia is an early childhood expert and manages her four better than I do my two. Flavia conducted an experiment on the (and she explains it better than me) quantitative relationship between number of children and IQ using the Inverse Square Law of Mathematics. In other words, she tested her IQ after each child and found herself to have lost an average of 2 IQ points for each child. We'll let you know if the points come back. ;)

And in other news...

The fabulous Emily agreed to guest host the Hump Day Hmms for me next Wednesday. You've got the topic (something you experienced that affected and affects you) so send the links to Emily at Wheels on the Bus. Her email is on her blog but I'll make it easy for you: emilydotrdotrosenbaum at gmaildotcom

This means next Wednesday the Hump Day Hmms won't be here (they'll be there), but remember, Flavia is guest posting so check here to read her too. :)

And if you missed it, make sure to see if you qualify to join the WOAH club.

Emily said…
Blogsitting. Brilliant.
I'm excited to read Flavia's take on life as "Julie's sister" because I was always "Kimber's sister"--In fact those were the first words my husband said to me when we met in high school. :) I rolled my eyes at him and said, yeah, I'm Kimber's sister. and walked away.